The Centre has been providing upto Rs 100 crore for diversification under various schemes, but experts say this is not even a drop in the ocean, especially for a state like Punjab where paddy and wheat grow on around 63 lakh hectares (155.61 lakh acres) during Rabi and Kharif seasons. 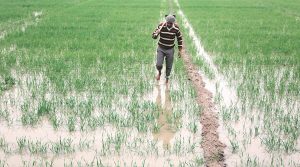 Amid the uproar over the Centre’s farm laws, farmers and experts in Punjab have stressed that the Centre should support crop diversification in the state, which has filled the coffers of the country with wheat and paddy by contributing maximum grain to the central pool.

During the Green Revolution, Punjab was among the pioneer states which had taken the responsibility to grow grain for the country, and the Centre also supported it by providing MSP, good seeds and subsidy on fertilisers during the revolution.

The Centre has been providing upto Rs 100 crore for diversification under various schemes, but experts say this is not even a drop in the ocean, especially for a state like Punjab where paddy and wheat grow on around 63 lakh hectares (155.61 lakh acres) during Rabi and Kharif seasons.

“In most such schemes which are supported by the Centre including diversification, there has always been a Centre–state sharing formula. If Centre is paying 60 per cent of the amount then the state has to pay 40 per cent. But most such schemes could not be implemented because the state government hardly had the amount to even 40 per cent of the share, and the Centre would not release its grant unless the state releases its share,” said a senior officer in the state agriculture department, adding that in the diversification programme too, this is the main hurdle.

“The Centre had launched a crop diversification programme which could be launched in districts having more than 50,000 hectares area under paddy crop. The scheme was meant for the original ‘Green Revolution’ states/districts like Punjab, Haryana and Uttar Pradesh,” said a senior officer in the department, adding that it however could not be implemented until the Centre pays 100 per cent support.

“Now if not they (Centre) do not want our wheat and paddy, they should support the state fully for diverting its area from paddy and wheat crops to maize, cotton, oils seeds, vegetables, fruits and must set up a mechanism that these diversified crop be procured at a minimum support price both by government as well as private players,” said Bharti Kisan Union (BKU) Dakaunda general secretary Jagmohan Singh, adding that farmers are ready to grow anything but need a respectable price for their produce.

“When Punjab and Haryana have filled the coffers of the country for five decades, then its the turn of the Centre to pay back and help such states fully with special packages and make a law to ensure a minimum respectable price for every crop they grow,” said Professor Gian Singh, a retired economics professor from Punjabi University Patiala.

The state government’s procurement agencies should procure these alternative crops from farmers and sell further to keep Punjab’s environment in good health, he added.

Punjab uses over 65 billion cubic metres of water annually, the major portion of which is used for producing paddy, which can be grown at half the current area under it by diverting area under cotton, maize, Basmati, sugarcane, agro forestry while potato, vegetables, oil seeds crops can decrease area under wheat.

“Only political will of the Centre is required to bring Punjab out of the wheat and paddy cycle as it is not that a difficult task for the government which has great minds to guide it,” said Sukhdev Singh Kokrikala, general secretary, BKU Ugrahan.

Former Punjab minister and chairman of Punjab Agro Industries Corporation Joginder Singh Mann said, “In the recently held meeting of the board of directors of the corporation accompanied by managing director of the corporation Manjit Singh Brar, we discussed the tremendous potential in the food processing sector and the farmers of the state could be immensely benefited if they adopt crop diversification and food processing sector.” He said that with the increasing demand of direct farm goods by the consumers, farmers could reap huge profits.