Tejashwi promised a number, BJP countered with its own — it rallied crowds and became this Bihar election’s refrain. At public meetings of four leaders who have emerged as the face of the polls, The Sunday Express finds four people with distinct voting choices and a common hope — rozgaar 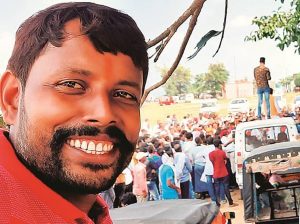 I have heard Chirag’s interviews. I liked when he asked why children from Bihar go to Kota for coaching when teachers, owners, students there are all from Bihar… why there are no companies in Bihar.

When I was working in Nashik (Maharashtra), I saw a lot of Biharis there, but in Patna, I don’t see people from other states. I like that Paswan talks about Bihar First, Bihari First… Earlier, Digvijay Singh (a Rajput, like Ram Bahadur) used to win as an Independent from here as he talked above caste lines. Now Chirag does the same.

Outside Bihar, I think Chief Minister Yogi Adityanath is good. He is very clear, strict. Criminals don’t have a free hand.

Bihar elections| Also voting today, in the shadow of NRC, a settlement of nomads

The initial years of Nitish were good. But, after the basics, he should have brought companies, created jobs. Now Nitishji is comparing his 15 years with Laluji’s and we are comparing him with other states.

As for Laluji, while stories of kidnapping and ransom were common… our region was not so affected… So, I don’t have a problem with anyone provided he takes the state forward.

I studied till Class 10, but had to start working at a young age as an electrician in Nashik, earning around Rs 7,000. Then, in 2011, my father died, and I returned. Here, there were no jobs and I had to take up farming. We have a 3.5 bigha land, from which I earn Rs 30,000 per month. But the expenses are a lot. We are three brothers… We live in fear of droughts, floods.

Farming is not a 24X7 job, it is seasonal. But I could not find any electrical work here…

My daughter is 3, I hope I can give her the best education… A government job means I can take loans for education, a house. One’s value rises, children can marry well. 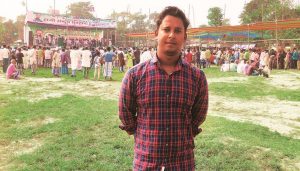 Tejashwi is young, talks about students, employment for youth. It is my first political rally. People are talking about Tejashwi a lot, particularly his promise of 10 lakh jobs.

I like Kanhaiya Kumar. He talks about the poor and marginalised. I am also impressed by Samajwadi Party leader Akhilesh Yadav.

Nitish Kumar did some good work, like his schemes for women. But that’s not enough in a state with so much poverty. He talks about Lalu Prasad’s jungle raj… But if I were to compare, I don’t see any significant change in terms of poverty alleviation. Unemployment rate is on the rise. Nitish could have generated sources of employment. His Jal Jeevan Hariyali scheme remained only on paper. There is no college in Baisi. People go out in search of employment.

Where is the government?… People can say there was jungle raj in Lalu’s time but I am not voting for him, I will vote for Tejashwi. Whoever can provide employment, people will vote for that party. I think Tejashwi will deliver.

I am pursuing BSc from Patliputra University. My father is an imam and earns Rs 20,000 per month and supports a family of seven. My four brothers are also studying and dependent on his income. During the lockdown, my father’s income dried up. We have been living on our savings, but for how long can we do that? I came home during the pandemic and am planning to return to Patna once my university opens.

The past few months have been tough. The ration supplied by the government during the lockdown has been very helpful. For families like us whose monthly income is no more than Rs 20-25,000, the food saved us.

Once I finish my studies, I want to take up a government job. For a family that doesn’t have regular income, a government job provides security. I know Prime Minister Narendra Modi talks about self-reliance but the government must also provide jobs for the youth.

Why she is at the rally

Several from my tola were coming, my husband Ashok Kumar is here too, so I came. I like Nitish Kumar, he is a decent man, wants to do well… I have been to several rallies… Narendra Modi, Lalu Prasad.

A leader she admires

I have no interest in any leader. They only say they will work for the poor, but what do they do for us? Nothing.

I liked Nitish earlier, he did very good work in his first five years. When he brought in prohibition, I liked him even more. But one can still get alcohol everywhere. I also like his cycle scheme for girl students. So maybe even now I like him more than anyone. Par gussa bhi hai (But there is anger too). In his last term, he did not do anything and then the lockdown killed us. So many people walked home, including to our Dalit tola.

Lalu understood the poor, izzat diya (got us respect)… In his time we felt we also meant something.  Lekin, suraksha nahin diya (However, he couldn’t provide security)… Jungle raj was a bad time, it was dangerous on the roads.
But now there is little money for anything. How do we choose?… I have lost faith.

Her fears for her family

My husband works as a daily wager at construction sites. Before the lockdown, he earned Rs 350 a day. But in the four months of the lockdown, he earned nothing. We have a son who is 16 and daughter who is 13, and hence expenses for four… food, medicines. No one in my family lives outside the state, but I know many who do. We thought about leaving after the lockdown too, someone said there would be work in Punjab. But it is very far away, and my husband said let’s wait till Chhath. If someone goes, only he will. But I hope he doesn’t have to.

Government in her life

The last eight months have been very difficult, many days the children ate only once, often just rice and salt. Vegetables are so costly, we have them twice a week. In the rains, we borrowed Rs 6,000 to mend the roof, and don’t know how we will repay. We didn’t get any government support, except 5 kg of rations.

The government did get us electricity three years ago, but my husband is worried if we can pay the power bill. We have a Jan Dhan account, but it has no money right now. 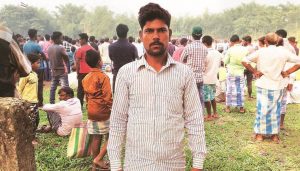 ‘In Owaisi, our area may have a leader’

I have come all the way from Pauri in Uttarakhand to vote for Asaduddin Owaisi’s AIMIM. I work there at a construction site. About 20 of us booked a private bus to come, paying Rs 4,000 each. Owaisi is sincere and reaches out to people in need. He talks about the poor. Recently, we saw on YouTube how he reached out to the flood-hit in Hyderabad. I pray he wins so that this region too gets a leader who stands with people. This is the second rally that I am attending.

I don’t know much about other leaders.

Nitish Kumar recently got roads built in this part of the state, but it was only for the elections. He didn’t care the last 15 years. When all states were making arrangements for migrant workers during the lockdown, Nitish forced us to stay where we were. People who came were beaten by the police… I was a child when Lalu Prasad was the chief minister, and so I don’t remember much. But he launched the Garib Nawaz train service from Kishanganj. I appreciate that.

I am the fourth of nine children and my parents are dead. At the age of 12, I had to move to Uttarakhand to find work. Four of my brothers are also outside the state as there is no work here. I earn Rs 15,000 per month and send Rs 10,000 for my wife and three children… For the first two months of the lockdown, I had to borrow money to survive.

Though the government announced schemes for migrant workers during the lockdown, my family received only 1.5 kg of rice once. I had to stay back in Uttarakhand. Fortunately, in the past few months I have found some work in Uttarakhand, and managed to pay back a part of the loan I had taken.

I can’t even dream of getting a government job. Being an illiterate, there is no chance of getting one either… Being poor is a different experience. You just grab whatever comes your way. It’s a question of surviving with the bare minimum.