A 17-year-old boy was charred to death, while two of his friends were seriously injured when the Baleno car they were travelling in collided with a Honda City at the Sector 28/29-Industrial Area light point during the wee hours of today. 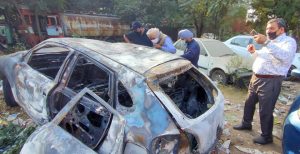 The Baleno, that had a CNG kit fitted, caught fire following which the minor boy’s body was charred while the other two also received serious burn injuries.

The deceased has been identified as Akashdeep (17), a Class XII student and resident of Gurdaspur district. His friends Dalip and Vishal were seriously injured. Akashdeep and Dalip had come to the city yesterday to celebrate Vishal’s birthday.

They were returning from Sector 22 towards the Industrial Area when their car was hit by a speeding Honda, heading from Tribune Chowk towards the Transport light point, around 3.30 am. Vishal, who is a taxi driver, was driving the Baleno, while the Honda was being driven by Rajneesh (52), a resident of Sector 28.

The trio was heading to Zirakpur were they were supposed to stay at a hotel.

The police said the Baleno car went up in flames following the collision. There was a CNG kit installed in the car, which may have led to fire.

However, the police said the cylinder did not burst.

The injured could not come out of the car and all three suffered burn injuries. Akashdeep’s body was completely charred, said a police official.

A PCR vehicle rushed to the rescue of the injured, who were taken to the Government Medical College and Hospital, Sector 32, where doctors declared Akashdeep as brought dead.

The police and the Fire Department were informed about the accident following which cops and a fire engine reached the spot and doused the fire.

On a complaint of constable Gurnam Singh, who was on patrolling duty, a case has been registered under Sections 279, 304-A and 337 of the IPC against the accused driver at the Industrial Area police station.