No headway has been made so far despite five rounds of formal talks between the government and the agitating unions.

Arhtiyas in Punjab began their four-day strike against income tax raids, which they allege were conducted to intimidate them for supporting the farmers’ stir against the Centre’s agriculture laws.

Even as the protests against the Centre’s new farm laws neared their fourth week without any sign of a resolution, Union Agriculture Minister Narendra Singh Tomar Tuesday said he was hopeful that protesting unions would soon complete their internal discussions and resume talks with the government to resolve the deadlock. Sticking to their main demand for a complete repeal of laws, protesting farmer unions, on the other hand, said that a decision on the central government’s offer for fresh talks has been deferred to Wednesday.

No headway has been made so far despite five rounds of formal talks between the government and the agitating unions. On Sunday, the Agriculture Ministry had written to the protesting groups, urging them to specify their concerns on the government’s proposal and finalise a date for the next round of talks to end the protests.

Earlier in the day, Tomar met two more peasants’ bodies from Delhi and Uttar Pradesh that extended support to the legislations.

“Representatives of different farmers’ bodies had come to tell that the laws are good and are in the interest of farmers. They had come to urge the government not make any amendments to the laws,” Tomar said after meeting the two groups. “I am hopeful they (protesting farmers’ unions) will soon complete their internal discussions and come forward for talks. We will be able to find a solution successfully.”

Haryana Chief Minister Manohar Lal Khattar had to face farmers’ ire in Ambala Tuesday where peasants protesting against the Centre’s new agri laws showed him black flags and raised anti-government slogans. Some of the farmers allegedly tried to block Khattar’s vehicle but police managed to provide a safe passage to the chief minister, sources said. 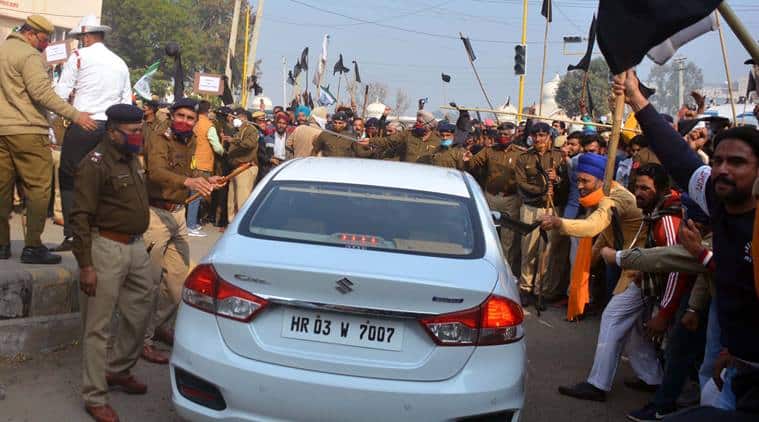 Khattar had come to Ambala to address public meetings in support of BJP’s mayoral candidate Vandna Sharma and other ward candidates for the upcoming civic bodies polls. As soon as Khattar reached Agrasen Chowk in Manmohan Nagar to address a public meeting, the farmers gheraoed his motorcade, waived black flags and raised slogans against the government and said that they would continue to protest till the three farm laws are not repealed.

Kerala Governor Arif Mohammed Khan declined approval for a special session of the state assembly to discuss and pass a resolution against the three contentious central farm laws, against which farmers have been protesting near Delhi, news agency PTI reported citing its assembly sources.

The session would not be held on Wednesday, as proposed by CPI-M led LDF government, since the Governor did not accord sanction, PTI reported.

Arhtiyaas (commission agents) in Punjab began their four-day strike against income tax raids, which they allege were conducted to intimidate them for supporting the farmers’ stir against the Centre’s agriculture laws. According to Federation of Arhtiyas president Vijay Kalra, crop was neither sold nor purchased at grain markets in the state.

“All arhtiyas went on a four-day strike. They kept their shops shut,” Ravinder Singh Cheema, president of the Punjab Arhtiya Association was quoted as saying by PTI/

Hundreds of vehicles snarled up on the Noida-Greater Noida Expressway due to a demonstration by a group of farmers who came out on the road in support of the new farm laws.

The protestors, mainly residents of Jewar and Dadri in Greater Noida, were allegedly stopped by police at Mahamaya Flyover, the officials told PTI. Normal traffic movement on the Greater Noida-Noida route was restored after a disruption that lasted around three hours, they said.

“Normal traffic movement has resumed at the stretch near Mahamaya Flyover after a brief disruption,” a Noida Traffic Police official said.

However, one carriageway (Noida to Delhi) remained closed at Chilla border where scores of members of the Bharatiya Kisan Union (Bhanu) are camping since December 1 in protest against the three new farm laws. “The other carriageway (Delhi to Noida) at Chilla is open. Commuters may take the DND or the Kalindi Kunj routes if travelling between Noida and Delhi to avoid inconvenience,” the official added.

The Opposition Congress staged a walkout from the Uttarakhand Assembly in protest against the Centre’s new farm laws, saying they were meant to destroy farmers.

The Congress MLAs walked out when state Agriculture Minister Subodh Uniyal accused the party of being hand in glove with middlemen and fomenting the agitation to retrieve its lost political ground.

The Congress members led by Leader of Opposition Indira Hridayesh rose from their seats in protest when Uniyal said they did not seem to have read the new farm laws thoroughly and their party was misleading farmers to suit its own political ends.

Asking why farmers are out in the streets in severe cold if the new farm laws are in their favour as being claimed by the Centre, Hridayesh said the ongoing agitation by farmers has drawn international attention with even Canada supporting the stir.