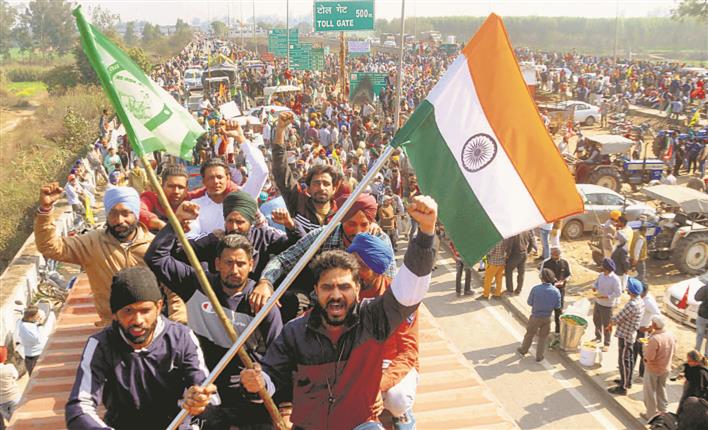 Amid stepped up security, protesters on Saturday blocked key roads in Punjab, Haryana and Rajasthan while scattered demonstrations were held in several other states during the three-hour ‘chakka jam’ called by farm unions agitating against the Centre’s new farm laws.

In Ghazipur, farmers’ leader Rakesh Tikait declared the protest on Delhi’s outskirts would continue till October 2 and efforts made to “connect every village” with the agitation. Farmers in Punjab and Haryana parked their tractor-trailers or squatted on roads. Some perched atop tractors hoisted the Tricolour at the KMP Expressway. Commuters were politely requested to turn back.

Will stay put till Oct 2: Tikait

Our protest on Delhi’s outskirts will continue till October 2. Farmers will return only after the govt repeals the laws and makes a law to ensure guarantee for MSP.

In Punjab, ambulances and other emergency services were unimpeded. Protesters at roundabouts, including Chandigarh, carried placards, posters and flags of kisan unions as well as the national flag.

Farm unions along with Khet Mazdoor Union members blocked the Sirsa-Barnala highway in Mansa. The Mansa-Patiala highway near Bhikhi and the Mansa-Ratia highway at Budhlada too were blocked.The protesters raised slogans, demanding that Internet services and basic amenties at the protest sites on Delhi borders be restored, police cases against farmers cancelled and youths arrested post Red Fort incident be released. In Amritsar, the “chakka jam” call received a huge response with students and shopkeepers in large numbers expressing solidarity with the farmers.

Jind district, roads were blocked at 50 sites. Highways connecting Rohtak to Delhi, Panipat, Jhajjar, Jind, Bhiwani and Sonepat were blocked at more than 10 places. In Karnal, the farmers blocked roads at 12 points while in Kaithal 10 roads were blocked. In Ambala and Kurukshetra, farmers from Haryana and Punjab held a joint protest near the Shambhu toll plaza.