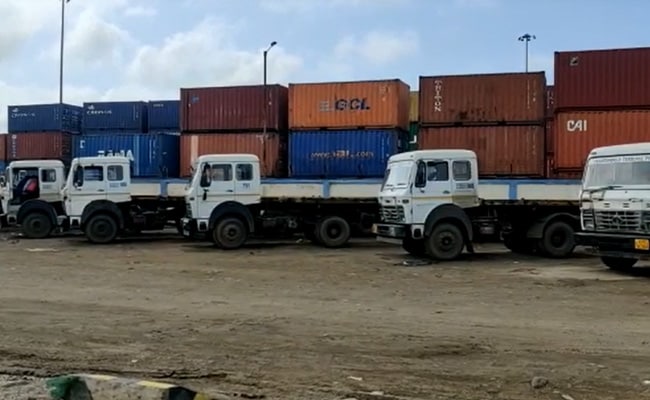 The seized drugs have an estimated street value of nearly Rs 20,000 crore

The Enforcement Directorate has initiated a money laundering probe into the seizure of around 3,000 kg of heroin – valued at nearly Rs 20,000 crore – from Gujarat’s Mundra Port.

Recovered Monday, the drugs were part of a shipment of talc from Afghanistan that arrived in India via Iran, according to news agency AFP.

2,000 kg were found in one container and the rest in another. The drugs were seized after physical verification of the substance. Officials said the drugs were packed into the bottom of bags, with layers of talc placed above to throw off suspicion.

The Directorate of Revenue Intelligence (DRI), which conducted the seizure, has so far arrested two people and carried out searches in Ahmedabad, Chennai and Delhi, according to Gujarat Special Public Prosecutor Kalpesh Goswami.

Mr Goswami said the two – a husband-wife duo of Sudhakar and Vaishali – were picked up in Chennai, produced before a special court in Gujarat last week, and sent to DRI custody for 10 days.

The haul has triggered a row given Gujarat is the home state of the Prime Minister and the Home Minister, with the Congress leaping to criticise the ruling BJP ahead of next year’s election.

Addressing a press conference in Delhi this evening, leader Pawan Khera asked the BJP “can (you) tell us why Gujarat has become such a hotbed for drug smuggling?”

“What is the reason Gujarat has so much drug smuggling coming in? Why are we not busting this racket? How is it the syndicate still carrying on? This is a serious matter…” Mr Khera said.

There are several ports across the Indian coast line, yet drug smugglers only want to use Gujarat. The all important question being, do they consider it safer? #BJPGujaratDrugsModelpic.twitter.com/qJ8JudsYb0

“PM is from Gujarat… Home Minister is from Gujarat… yet drug smugglers find this route the most conducive… why?” he continued, claiming smuggling had spiked in the past seven years but the Modi government “has turned the NCB into their personal vendetta agency…”

The Congress also took a swipe at the BJP over the Narcotics Control Bureau’s high-profile investigation of alleged drug abuse surrounding the death of actor Sushant Rajput last year.

The investigation – which pulled in Bollywood stars and triggered a political row all of its own – was based on the recovery of just 59 grams of heroin and tenuous links to Mr Rajput.

They weren’t the only opposition party to flag this; Shiv Sena MP Priyanka Chaturvedi tweeted: “59 grams of marijuana found in a WhatsApp chat conversation had led to near-heart seizures of TV newstainment anchors. Surprised to note 3,000 kg of heroin has not had the same result…”

59 grams of marijuana found in a WhatsApp chat conversation had led to near heart seizures of TV newstainment anchors.
Surprised to note that 3000kgs of heroin found has not had the same result.
Clearly these newstainment channels outrage also depends on their Sarkar ki seva.

Afghanistan is the world’s biggest heroin producer; it supplies over 80 per cent of global output.

Since seizing power the Taliban has said it will crack down on drugs but hasn’t yet said how. Experts say they will struggle to walk away from a trade that helped fund their return to power.

With input from AFP