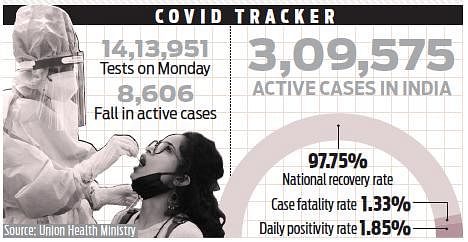 NEW DELHI: Senior scientists associated with the ICMR have come up with a set of prescriptions to lower the risk of a localised COVID-19 surge due to any increase in population density in the wake of the upcoming festive season and people undertaking “revenge travels”.

The researchers have suggested to the state governments that they may consider requiring proof of completed vaccination status or a recent COVID negative test result in order to stay at accommodations in destinations within the state.

These requirements, says their paper, could be applied at the point of arrival in holiday accommodation, where current rules require the collection of traveller detail.

All travellers should also register their contact details upon arrival to facilitate contact tracing in the event of any upsurge in infection, the researchers associated with the ICMR, including its director general Balram Bhargava, and Imperial College, London, have recommended.

The analysis noted that following the second wave, there has been an upsurge in domestic travel to holiday destinations, particularly Himalayan towns. Modelling suggests that such travel could enhance the peak of a third wave in these states by almost 50 per cent. Principles of ‘responsible travel’ should be adhered to, the authors have said.

The researchers said that data from Himachal Pradesh suggests that in a typical holiday season, tourism can increase the population, and thus population density, by 40 per cent. Taking this into consideration, the third-wave peak could increase by up to 47 per cent during the holiday season, and could occur two weeks earlier, compared to a scenario of easing restrictions in the absence of holiday travel.

The analysis also threw up a scenario where population density in India has a stronger effect on transmission than in the USA and therefore the holiday period could amplify the third-wave peak by up to 103 per cent and cumulative incidence in that wave by 43 per cent, and hasten the timing of the epidemic peak by four weeks, compared to a scenario of easing restrictions in the absence of holiday travel.

As India hopes to receive the first batch of single-shot COVID-19 vaccine by US pharma major Johnson & Johnson in October, the company released data from the real world to claim that it offers nearly 81 per cent protection against hospitalisation, even against delta variant.

Calling it the largest real world evidence study reported to date in the US, the company said the vaccine showed stable effectiveness of 79 per cent against infections and 81 per cent against COVID-related hospitalisations.

There was no evidence of reduced effectiveness over the study duration, including when the delta variant. The study included 3,90,000 people who received the Johnson & Johnson vaccine versus about 1.52 million unvaccinated people from March to late July.

R-value drops below 1 in September

R-value, which reflects how rapidly coronavirus pandemic is spreading, dropped to 0.92 by mid-September after spiralling over 1 by August-end, according to researchers. However, the R-values of major cities, Mumbai, Kolkata, Chennai, Bengaluru, are over 1.

The R-value of Delhi and Pune are below 1. The R-values of Maharashtra and Kerala are below 1, giving a much needed relief to these two states with the highest number of active cases. The R-value was 1.17 by the end of August. It declined to 1.11 between September 4-7.

The Former US Secretary Of State Visited India 4 Times From 2001-2004. See Photos

What is Army Chief doing in Sri Lanka?

Communities Along Sukapaika River in Odisha Come Together to Reverse a...