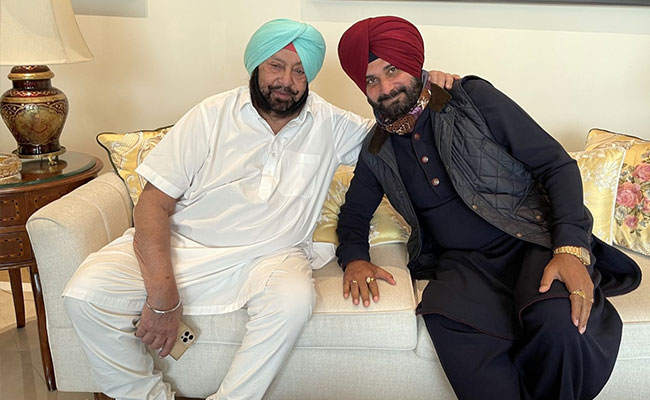 Navjot Singh Sidhu is known for his witticisms and motor mouth. But he now appears to have become the punchline himself. His latest tantrum could spell the end of his political journey which started after a not-so-glorious cricket career. Sidhu, like his batting, is unidimensional. He refuses to change either his style or his content. This did not bring him great glory in cricket, and is now repeating in politics. He thought he was destined for bigger things – in particular, being Chief Minister of Punjab – and as of this moment, that ambition is navigating disaster. And as always, it’s likely that the 57-year-old will blame not himself but others.

Sidhu’s abrupt resignation as Congress chief in Punjab be a boon in disguise for the party. The world knows Sidhu as temperamental; Captain Amarinder Singh terms him “not a stable man”. In the last few months, the Congress leadership has bent backwards to accommodate his wishes, making him not only the state party president but effectively sacking its tallest leader in the state, Captain Amarinder Singh. In keeping with Sidhu’s wishes and demands, Sukhjinder Singh Randhawa, the choice of the Congress MLAs for Chief Minister was discarded, and on his advice, Charanjit Singh Channi was appointed to the top job. But when Sidhu tried to act as a “Super Chief Minister”, the Congress decided to push back. True to his nature, Sidhu acted to his own detriment. Now he seems isolated, and his resignation may not create the big crater he expected.

If Sidhu does not withdraw his resignation, a new state Congress chief is likely to be appointed to prove he has exhausted his political capital within the party. In my opinion, the Congress blundered in appointing him chief in the first place. Sidhu is charismatic, honest, a great orator who draws large crowds, but he is neither a team player nor an inspiring leader. He is too temperamental and ambitious. He left the BJP in 2017 because he felt he was not getting his due. He then floated his own outfit which was too small to fulfil his mammoth ambitions. Then he flirted with the Aam Admi Party (AAP). Arvind Kejriwal in a 5 AM meeting realised that Sidhu was too hot to handle and cleverly offered him a deal he had to refuse. Sidhu was told that AAP could field his wife, an MLA, in the elections, and Sidhu would campaign for the party. Sidhu had not bargained for this. He got the message. He then met Rahul Gandhi and joined the Congress Party.

One can argue that Sidhu was used to topple Amarinder Singh, and then Sidhu trapped himself and resigned. Those who support the Gandhis can only wish that all this was done by design. Instead, they genuinely believed that it was time to let him take charge. Handing over the entire Punjab Congress to him was naive and immature. The Gandhis will make an equally big mistake if his resignation is not accepted. The Congress is not in a position to honour his ambition to make him Chief Minister and if it does so by removing Charanjit Singh Channi, then the Congress will antagonize the 32 per cent Dalit votes which have reportedly started galvanizing around Channi. It is better if the Congress begins anew with a clean slate in Punjab. Channi should continue as Chief Minister and a new party chief should be appointed and the two should work in tandem.

The Congress in Punjab is facing anti-incumbency, though it is not massive. The removal of Captain Amarinder Singh was a move in the right direction to neutralise the anger of the people up to a certain extent. If Channi, with his Dalit support, is able to project himself as an honest crusader in Punjab politics, he could lead the party to re-election, but if Sidhu is retained, the Congress will have seated itself on a time bomb. Any more explosions courtesy Sidhu and the Congress will face total annihilation in the state.

Let’s accept the new reality in Punjab where politics since the death of Beant Singh have hinged on Prakash Singh Badal and Captain Amarinder Singh. This will be the first election where neither leader is centrally placed. If Badal is too old to run for another term, Amarinder Singh has been marginalized (as of now). And AAP remains hamstrung by not having a leader it can offer as Chief Minister. The Congress should be able to turn this landscape into a significant relief map by choosing a Dalit leader as Chief Minister, a revolutionary step in Punjab. The 32% Dalit vote could become the Congress torch-bearer provided the party shows it is willing to truly empower it. If it tries to weaken Channi or corrode his power as Chief Minister, if he is made to accommodate the whims and egos of senior leaders like Sidhu, if a perception is created that not Channi but someone else runs the government, the Congress could turn its “master-stroke” into “disaster-stroke.”

Punjab has recently shown it is more than open to experimenting. The unprecedented support extended to AAP in the 2014 parliamentary election is testimony to that fact. AAP most unexpectedly won four of the state’s 13 Lok Sabha seats. In the 2017 assembly election, there was a massive surge for AAP till AAP squandered it all at the last minute. Every opinion poll had predicted a historic win for AAP, but its leadership proved to be incapable of cashing on that goodwill, instead it betrayed their feelings. AAP’s naivety in understanding Punjabiyat, the nuances of the Sikh religion and its relationship with politics, proved to be its undoing, and after heading towards a socio-political revolution in Punjab, AAP had to contend with 20 seats and 23.8% votes. I am not sure if AAP has learnt any lesson; this time around, it is again offering neither any vision or leadership. The problem with AAP is that it thinks that people can be won over and over by doling out free water and free electricity.

In Punjab, the Congress does not need to do anything spectacular. Channi’s appointment is in itself a new beginning and now it only has to create a perception that a new Congress that is willing to approach politics in a new manner. But as usual, the Congress is in danger of destroying its own advantage. That is its biggest enemy.

(Ashutosh is Author and Editor, satyahindi.com.)

Disclaimer: The opinions expressed within this article are the personal opinions of the author. The facts and opinions appearing in the article do not reflect the views of NDTV and NDTV does not assume any responsibility or liability for the same.