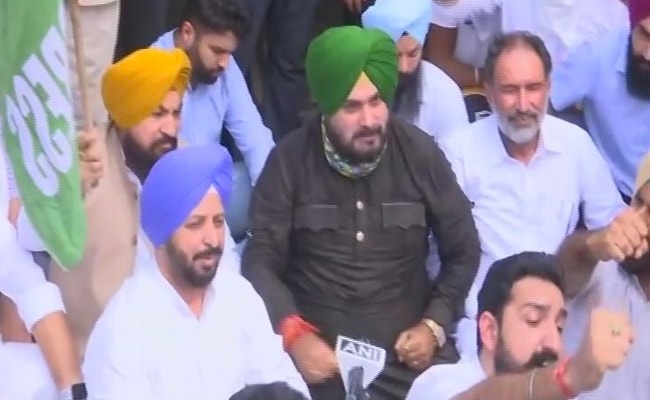 Navjot Sidhu was detained on Monday amid a protest against Lakhimpur violence.

Congress leader Navjot Singh Sidhu this evening warned the Uttar Pradesh government the Punjab Congress will lead a march to UP’s Lakhimpur district – where violence erupted on Sunday, killing eight people – if the accused is not arrested, and Priyanka Gandhi Vadra, who is in police custody since yesterday, is not released.

“If, by tomorrow, the Union Minister’s son behind the brutal murder of farmers is not arrested, and our leader @PriyankaGandhi being unlawfully arrested, fighting for farmers is not released, the Punjab Congress will march towards Lakhimpur Kheri! (sic),” Mr Sidhu, 57, tweeted.

Priyanka Gandhi Vadra said she was arrested “illegally” in Uttar Pradesh’s Sitapur on Monday when she was on her way to Lakhimpur where eight people, including four farmers, were killed on Sunday. Violence erupted in the UP district, about 400 km from Delhi, when farmers were protesting against BJP leaders.

If, by tomorrow, the Union Minister’s son behind the brutal murder of Farmers is not arrested, and our leader @PriyankaGandhi being unlawfully arrested, fighting for farmers is not released, the Punjab Congress will march towards Lakhimpur Kheri ! @INCIndia@INCPunjab

No arrest has been made even though a murder case was filed. Union Minister Ajay Mishra’s son, Ashish, is named as the only accused. Farmers have alleged he was driving a car that ran over eight people. The Minister and his son have maintained they were not at the site.

The Congress has been attacking the BJP over Ms Gandhi Vadra’s arrest, saying no arrest memorandum has been shared. Priyanka Gandhi said she was “manhandled, pushed and shoved” during the confrontation. Today, former Union Minister P Chidambaram, while talking to NDTV, said, “No woman can be arrested before sunrise.”

The Congress has also been questioning why the accused is still free.

Earlier in the day, Chhattisgarh Chief Minister Bhupesh Baghel began a sit-in outside Lucknow airport as he was stopped by the state police when he was on his way to meet Ms Gandhi Vadra.

On Monday, Punjab, Haryana and Delhi saw protests over the deaths in Lakhimpur. Punjab Chief Minister Charanjit Channi was among several leaders who were blocked from visiting the UP district.

Navjot Singh Sidhu was detained briefly as he led a protest by Congress workers outside the residence of the Punjab Governor in Chandigarh, raising slogans against the centre over the new farm laws. He also demanded the arrest of Union Minister of State Ajay Kumar Mishra’s son.

Just last week, he had quit as the Punjab Congress Chief amid differences with the Chief Minister over key decisions linked to cabinet and bureaucracy.  Two days later, the resignation was withdrawn – his aides said it was an “emotional outburst”.

Despite last week’s crisis, Mr Channi and Mr Sidhu are on the same page on Lakhimpur incident.