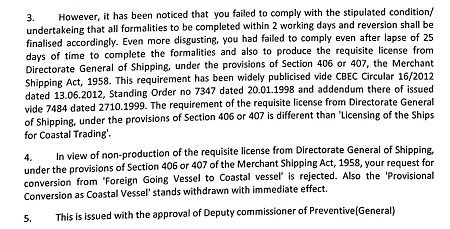 In a fresh development to the Mumbai cruise drug bust case, the customs department has sent a notice to Cordelia Cruise revoking the PP (Provisional Permit) after the management failed to submit the required documents from the DG Shipping even after a lapse of 25 days.

On September 15, the provisional license for conversion from foreign-going vessel to coastal vessel was issued to Cordelia Cruise, which was extended till September 19. A certificate was issued for the passenger cruise on the same day in general faith as a facility under ‘ease of doing business’.

The notice says that following the grant the passenger ship has failed to comply with the stipulated undertaking that all formalities will be fulfilled within 2 working days and the reversal will be finalized accordingly. It also charges the cruise for its inability to produce the requisite license from the directorate general of shipping even after a lapse of 25 days.

However, a report by India Today claims that the Customs department has given a time of two days to Cordelia Cruise ship to furnish its provisional license under Sections 406 or 407 of the Merchant Shipping Act, failing which the license will be canceled.

It read, “I wish to express that Cordelia Cruises is in no way, directly or indirectly, connected to this incident. Cruises had chartered its ship for a private event to a Delhi-based event management company. We condemn all acts such as these and will strictly refrain from letting our ship out for similar events in the future.”