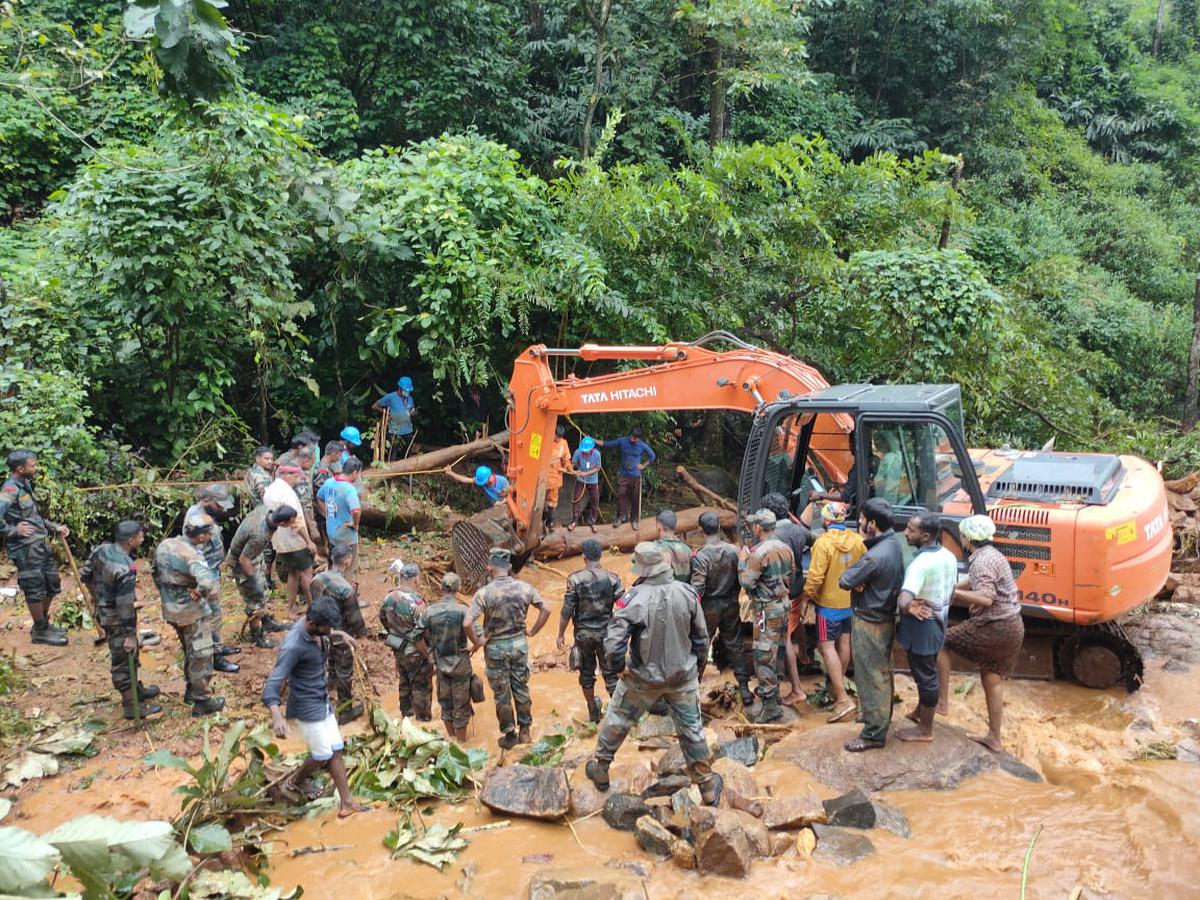 Chief Minister Pinarayi Vijayan, who chaired a review meeting in the evening, described the situation as grave and promised all-out efforts to rescue people stranded in cut-off locations. Indications are that the weather situation will not worsen, Mr. Vijayan said.

Higher education institutions which were slated to function from Monday will reopen only on Wednesday, in view of the rainfall situation, it was decided at the meeting chaired by the Chief Minister. The Sabarimala pilgrimage will be avoided till Tuesday, in view of the forecast that the rain will continue till then.

Here are the updates:

Two more dead bodies have been recovered from Koottickal, taking the total number of deaths to 11.

Rainfall decreases in intensity over Kerala

The intensity of rainfall over Kerala is decreasing with the low pressure area over southeast Arabian sea and adjoining Kerala becoming less marked.

The IMD Meteorological Centre here has forecast light to moderate rainfall at many places with only isolated heavy rainfall over Kerala during the next 24 hours. Rainfall is expected to further decrease subsequently.

Though rainfall almost subsided in Alappuzha on Sunday morning, a rise in water levels in major rivers has led to the flooding of low-lying areas. Floodwaters have entered a number of houses in Thalavady, Muttar, Edathua, Veeyapuram and Pallippad in Upper Kuttanad.

Parts of the Alappuzha- Changanassery (AC) road and Ambalappuzha- Thiruvalla road have been waterlogged. At least 30 families from Mulakuzha and Edanad in Chengannur were shifted to relief camps after floodwaters inundated the areas.

With the water flow through the rivers including Pampa, Manimala and Achencoil expected to increase further due to heavy downpours in the neighbouring districts, the district administration has made all necessary arrangements to deal with any exigency. Officials said that boats would be deployed to conduct rescue operations if needed.

A rescue operation in progress after a major landslide was reported from Koottickal, Kottayam on Sunday, October 17, 2021

“We are continuously monitoring the situation in parts of Kerala in the wake of heavy rainfall and flooding. The central govt will provide all possible support to help people in need. NDRF teams have already been sent to assist the rescue operations. Praying for everyone’s safety.”

Dead body of one more person, identified as Martin, recovered from Kavai, taking the total number of deaths in Koottickal panchayat to nine. A view of the destruction caused by the landslide reported at Kuttikkal in Kottayam, October 17, 2021

One more dead body of a woman recovered from Kavali, Koottickal. With this, total number of deaths in Koottickal rises to eight.

A day after the Koottickal village was hit by a series of landslides, the authorities on October 17 recovered four dead bodies from the location, taking the total number of deaths to seven.

One of the deceased was identified as Shallat, a 29-year-old native of Koottickal. During a search operation in the morning, the dead body was found among the debris. The deceased was not among the list of persons, who had been reported to have gone missing from the village the other day. The other three persons are yet to be identified.

Searches are now on to trace others, who have gone missing from the village in the landslides.

The heavy rainfall that pounded the capital district on Saturday caused waterlogging in low-lying areas, damaged houses and forced the district administration to evacuate several families to safer locations.

Search will resume on Sunday for a Jharkhand native who went missing in the Amayizhanjan Canal on Saturday afternoon.

The missing man, reportedly a migrant labourer, has been identified as Nagardeep Mandal (30).

Heavy rainfall, accompanied by thunderstorms in some cases, pounded region due to a low pressure area over the south-east Arabian Sea since the early hours of the day.

Six of a family were killed while 15 others were reported missing in landslips in Plapally and Kavali in Koottickal panchayat of Kottayam district. Search and rescue operations were hindered by heavy rainfall and poor light. A man and a woman hailing from Koothattukulam were killed after their car was washed away by floodwaters at Kanjar in Thodupuzha, Idukki.