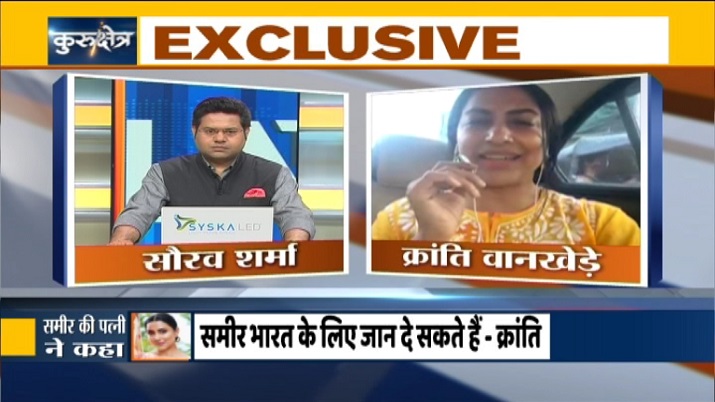 Sameer Wankhede news: My husband is being targeted for trying to clear the mess of drug use from the society,  Narcotics Control Bureau (NCB) zonal director Sameer Wankhede’s wife Kranti Redkar told India TV on Monday. In an exclusive interaction, Redkar said Sameer Wankhede’s track record is impeccable that is open for all to see.

“No one has ever raised any question over Sameer’s integrity,” she said.

“Had that been the case, we would have been crorepati…number of cars… enjoying a lavish lifestyle,” she added responding to allegations of extortion in the Aryan Khan arrest case.

Earlier in the day, Sameer Wankhede and the NCB approached a special court in Mumbai against the allegations of extortion levelled against them in the cruise drugs seizure case in which actor Shah Rukh Khan’ son Aryan Khan is an accused.

On Sunday, an independent witness in the cruise drugs case, in a statement to the media, claimed that Rs 25 crore was demanded by an official of the NCB and other persons, including absconding witness K P Gosavi, to let off Aryan Khan in the case.

Prabhakar Sail, the ‘independent witness’, told media persons that he had overheard Gosavi telling one Sam D’Souza over the phone, after Aryan Khan was brought to the NCB office following the October 2 raid, about a demand of Rs 25 crore and “to settle at Rs 18 crore as they have to give Rs eight crore to Sameer Wankhede”.