Coastal areas between delta districts to Chennai may experience severe rainfall on Wednesday as the Meteorological department has announced the weather system to have strengthened as a well marked low pressure area.

Read: Thanks to rain, vegetable prices soaring in city

As many as 3,691 irrigation tanks, accounting for around 26% of the total in Tamil Nadu, are full. This indicates the impact of the northeast monsoon, which has accounted for about 37 cm of rainfall in the State since October 1.

Even as most of the southern districts had declared holiday for schools and colleges for Wednesday, no significant rainfall was reported on Wednesday morning.

Senior officials, including district Collectors were inspecting flood prone and low-lying areas to oversee the arrangements made to mitigate impact of any possible flood.

“The sun is out here in Tenkasi district and schools and colleges are functioning as usual,” said, its Collector, S. Gopala Sundara Raj. The district had received 2.6 mm till Wednesday morning, he added. Water has been released from all the dams for irrigation purpose.

Depression to cross by Thursday

According to IMD, the well marked low pressure area over southeast and adjoining southwest Bay of Bengal is likely to concentrate into a depression by Wednesday night and move west–northwestwards and reach near north Tamil Nadu coast by Thursday early morning.

Then, it is likely to continue to move further and cross north Tamil Nadu and adjoining south Andhra Pradesh coast between Karaikal and Sriharikota around Cuddalore by Thursday evening. During the past 24 hours ending 8.30 a.m., Nagapattinam and Tirupoondi recorded an extremely heavy rains of 31 cm each. – K. Lakshmi

A professor of civil engineering from the Indian Institute of Technology Madras has invited people to provide details of flooding in the city, including the suburbs.

Parts of Villivakkam still under water

The data would then be shared with the Chennai Corporation, said Balaji Narasimhan, civil engineering professor. At a future date, it would enable government agencies to improve the design of roads, storm water drains, forecast, and facilities and improve their maintenance.

To provide details of flooding, a person should visit https://in.riskmap.org and click on it to submit report. It will, in turn, activate the user’s Twitter account and will ask the user to report flooding. Clicking on ‘report’ will activate the map. A toggle and a slider is provided to explain the level of flooding. Users can also upload a photograph along with a comment regarding the flooding. — R. Sujatha

The Chennai traffic police has closed the Madley’s Subway in T.Nagar, which was flooded due to the rains. Meanwihile, a part of Thrumalai Pillai road near the Kamaraj Illam caved in, forcing authorities for traffic diversions. Vehicles are not permitted towards Valluvar Kottam junction from Vani Mahal point, but allowed on the opposite side from Valluvar Kottam.

A view of the paddy filed submerged due to the rain in Manikandam in Tiruchi on November 9, 2021.

Coastal areas between delta districts to Chennai may experience severe rainfall on November 10, as the Meteorological department has announced the weather system to have strengthened as a well marked low pressure area.

The weather system over central parts of South Bay of Bengal is likely to concentrate into a depression by Wednesday evening. It is likely to move to west-northwestwards and reach Tamil Nadu coast by Thursday early morning.

However, there was no official word yet on further intensification of the weather system as deep depression.

The district administrations of Tiruvannamalai, Coimbatore and Tiruppur have declared holiday for all schools in the districts on November 10, due to rain. Similarly, holiday has been declared for all schools and colleges in Vellore, Ranipet and Karur by the respective Collectors today due to intense spell of rain.

In Pictures | Chennai receives heavy rainfall, waterlogging in some parts of the city 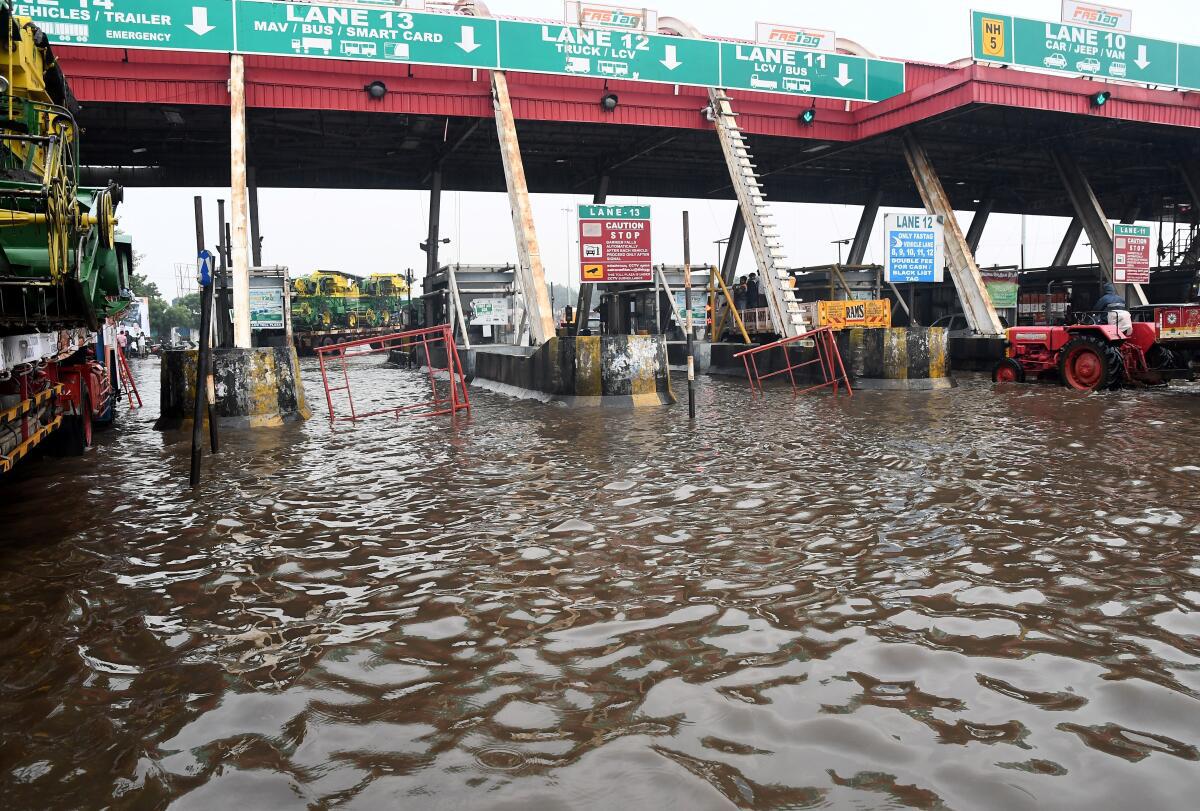 Vehicles struggle through the stagnated rain water at Chozhavaram toll plaza on the Chennai-Kolkata Highway on November 9 2021.
| Photo Credit: B. Jothi Ramalingam

On a day when Chennai had some respite from the rain, inundation cleared up in a few areas, but people were stranded and in need of help on Tuesday as the stagnant water was yet to be drained. Residents are approaching the next couple of days with dread as heavy rain has been forecast.

The Madras High Court warned the Greater Chennai Corporation that it would take up a suo motu public interest litigation petition on the travails of residents due to waterlogging, if the situation did not improve by Friday. Chief Minister M.K. Stalin warned that action would be initiated against the contractor implementing Smart City.

More than one-fourth of irrigation tanks are full

As many as 3,691 irrigation tanks, accounting for around 26% of the total in Tamil Nadu, are full. This indicates the impact of the northeast monsoon, which has accounted for about 37 cm of rainfall in the State since October 1.

Tanks across Coimbatore district up to the brim

Kanniyakumari, which has the maximum number of irrigation tanks in the State with 2,040 tanks, still has 842 tanks whose storage is equivalent to 75% of their capacity or less. The number includes 11 tanks which have nil storage.

Coastal parts of Tamil Nadu may have to prepare for another intense spell of rainfall as a fresh weather system is likely to form in the next 12 hours, and concentrate into a depression. It is likely to reach north Tamil Nadu by early in the morning on November 11.

While rains will cover most places of the State, the India Meteorological Department (IMD) has forecast heavy to very heavy rainfall at a few places on coastal TN. One or two places may even receive extremely heavy rains of above 20.4 cm. on Wednesday and Thursday.

(With inputs from Our Correspondents, agencies)