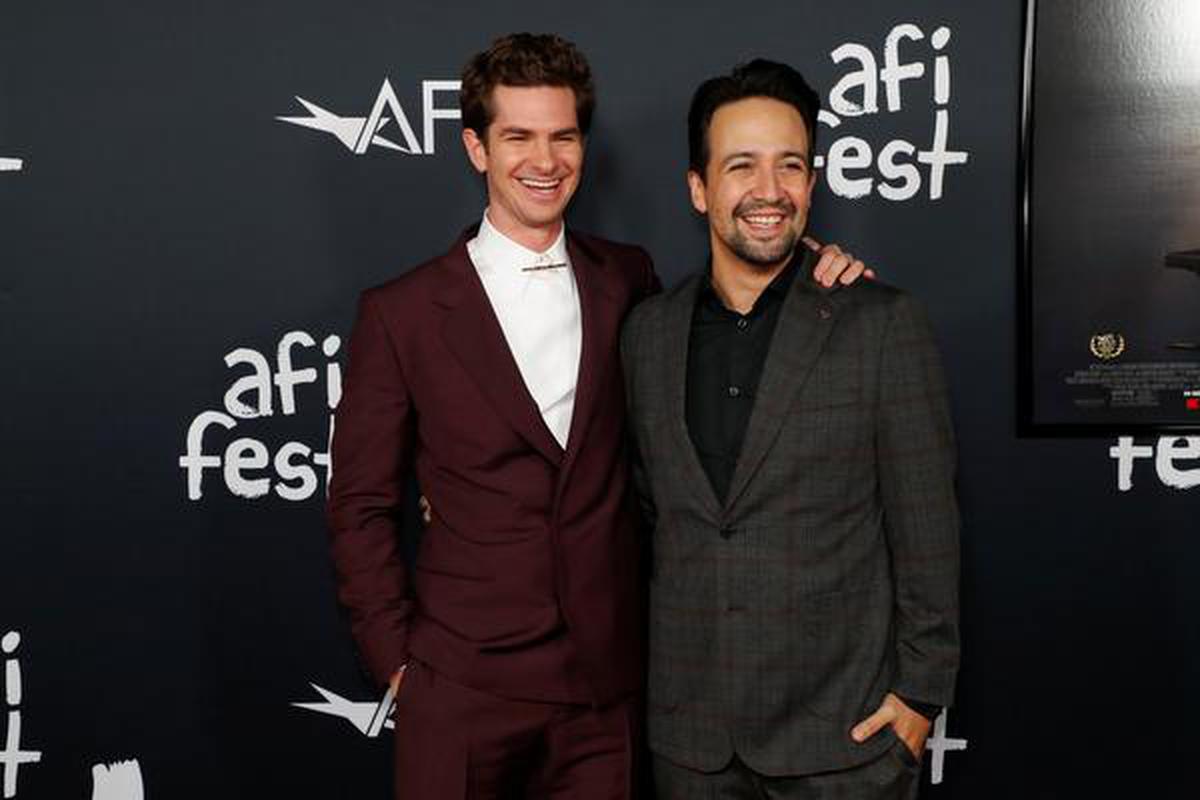 Ahead of the release of meta musical ‘Tick, Tick… Boom!’, multi-hyphenate Lin-Manuel Miranda gets candid about working with Andrew Garfield for his feature film directorial debut and why Jonathan Larson’s story needs to be told

In Lin-Manuel Miranda’s world, throwing a shoe at a performer is the highest form of praise. For early rehearsals of Tick, Tick… Boom!, lead actor Andrew Garfield was not exempt from the custom. Miranda laughs at the memory and says, “I wasn’t aiming at him, just to be clear. It’s just choir! When someone has a killer solo, you take off your shoe, chuck it and go ‘damn it, that’s amazing!’ It started with In The Heights [his 2005 musical], and that’s what I do when I run out of words to express myself.”

Also Read | Get ‘First Day First Show’, our weekly newsletter from the world of cinema, in your inbox. You can subscribe for free here

Miranda, 41, is all smiles over a video interview with The Hindu Weekend as he gears up for the world to watch his feature film directorial debut. The stage-to-screen adaptation follows the late Jonathan Larson during one of his most vulnerable moments as a playwright and composer.

Set in a 90s New York of curly-coiled telephone cords and oversized trench coats, Tick, Tick… Boom! is a musical within a musical. It narrates how Larson, after working for eight arduous years on his dystopian rock musical Superbia, had to eventually give up his dream. Audiences follow his story of creative loss, financial woes, and personal turmoil as he races towards an impending deadline — the metronomical tick, tick, tick — to put together a workshop for the musical, as he nears his 30-year milestone.

Message in a bottle

Even after his passing in 1996, Larson’s legacy as a game-changer for American theatre holds strong, and Miranda hopes no one ever forgets it. It was after watching Rent — the rock musical that won Larson three posthumous Tony Awards and a posthumous Pulitzer Prize for Drama — as a 17-year-old, that Miranda realised he, too, could write a play and have a diverse cast in a Broadway show.

When he watched Tick, Tick… Boom! in its Off-Broadway incarnation in 2001, his final year of college, he “loved that it was not about the story of writing Rent or of a guy writing his masterpiece. It felt like a private message in a bottle from Jonathan, that said ‘This is harder than you think it’s going to be, but it’s worth it if you really love it.’ It was scary and incredibly clarifying for me”.

Miranda enjoyed Tick, Tick… Boom! so much that he ended up playing Larson in the 2014 Encores! Off-Centre Revival. That said, he hopes the Netflix film, releasing on November 19, will be “a whole new homing beacon for artistes questioning whether they are pursuing the right path.”

Because it is, ultimately, a love letter to American theatre — as was Miranda’s magnum opus Broadway show, Hamilton. The ripple effect of the 2015 production (which raked in $30 million in advance ticket sales alone) was global; people in other countries booked flights to New York just so they could watch the rap musical, which follows the story of USA founding father, Alexander Hamilton. Disney+ later inked a deal with Miranda to get a filmed version on the platform and it proved successful: between July 3 and 13, 2020, more than 2.7 million households streamed it.

The post-Hamilton boom has ignited a new appreciation for musicals everywhere. Miranda has always believed that “musicals are like real life, but better”. He tells me: “Wouldn’t it be wonderful to live in a world where you can break into song and express your heart’s desires, and you have just the right lyrics to express how you’re feeling in that moment? So often, most of the best lyrics I write are things I wished I would’ve thought of at that time, or it’s that thought expressed that I can’t find the answer to in my real life. Musicals offer us a way to do that.” 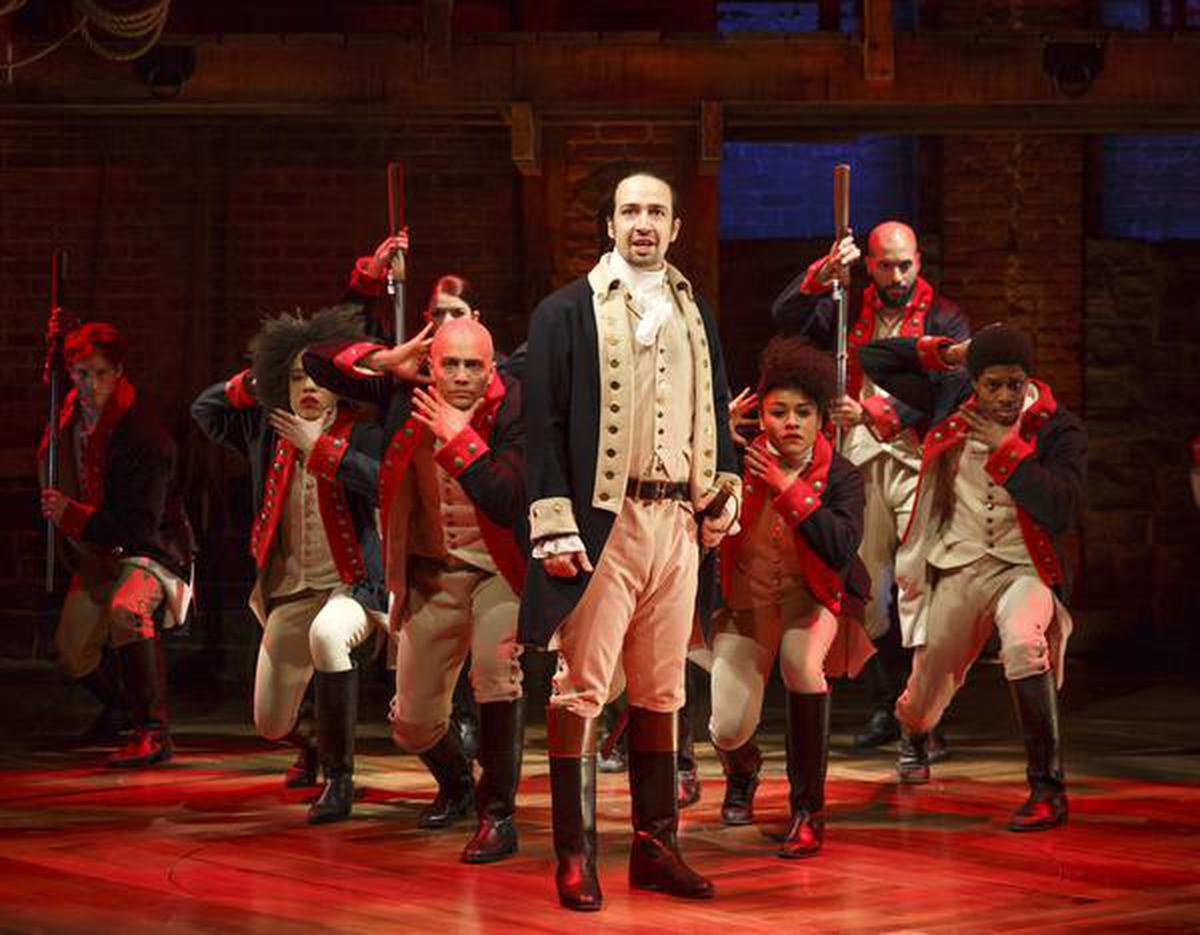 This image released by The Public Theater shows Lin-Manuel Miranda, foreground, with the cast during a performance of ‘Hamilton’ in New York.

“Basically, every project I’ve done since Hamilton has been the film school I could never afford,” says the composer, for whom it has been an illustrious six years in the film industry so far. He has worked with Rob Marshall on Mary Poppins Returns (2018), produced Fosse/Verdon (2019) with Tommy Kail, and shadowed John M Chu when he directed the 2020 musical film In The Heights (the earliest draft of the stage musical was written by Miranda in 1999). His new projects include South America’s first Disney feature film, Encanto, and the Halle Bailey-starrer The Little Mermaid.

For Tick, Tick… Boom!, it made sense that Miranda would want to work with like-minded people, needing “a theatre animal” to play Larson. In 2017, Garfield’s emotive portrayal of Prior Walter in the six-hour production Angels of America at the National Theatre in London, caught his eye. 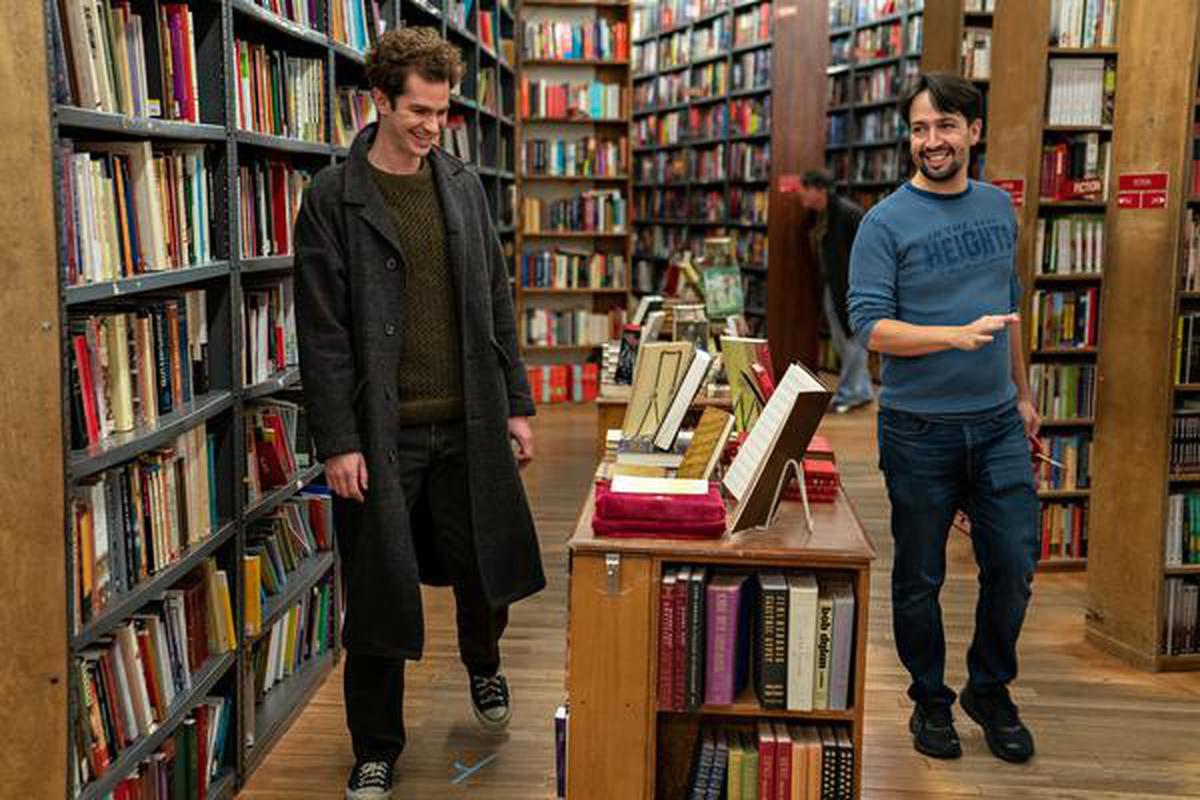 Trained by vocal coach Liz Caplan, The Amazing Spider-Man star was encouraged to think about singing in a new way, which worked well. “Liz is not someone who says ‘this is how you sing’ but rather ‘what’s blocking you from singing?’ Andrew had an inherent musicality that had barriers, and it was amazing watching, during reading after reading, how he would sing a little more and louder,” Miranda says.

He conveys nothing but “amazed respect” for the “fearless” actor who frequents biopic roles, but not many of the musical sort. “These notes are hard for even the most seasoned of singers to pull off, and he got himself there. I really saw my job as providing him the runway and resources for him to do whatever he needed to do.” 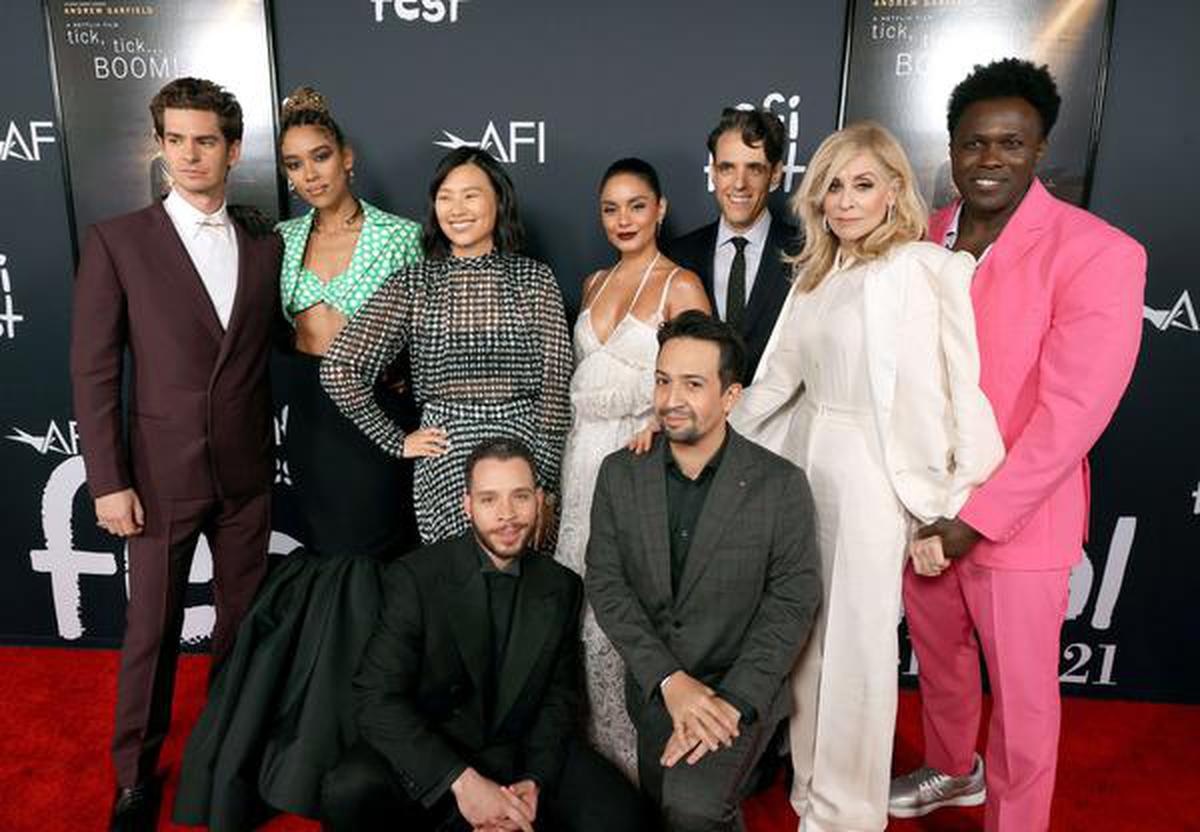 For the love of Larson

Like few others in the industry, Miranda — who is one Oscar away from EGOT (Emmy, Grammy, Oscar, Tony) status — understands the weighted responsibilities of adaptations particularly those of the stage-to-screen variety. That said, the story of Tick, Tick… Boom! has been foundational to Miranda’s career and life, given there is a strong parallel to the sentimental value of In The Heights.

“I still feel connected to those times of not knowing if I was going to pay my rent; I needed teachers to get sick so that I could get enough substitute teaching gigs to do so. That was my main job while I was in my first theatre show In The Heights,” he shares. “But there is real wisdom in that lesson.” As expected, the film builds upon the original story to aid Larson’s journey, and Miranda worked with screenwriter Steven Levenson to bring even more humanity to it, to the point where audiences leave pondering the bigger picture of the pursuit of happiness. He also wanted to be as close to Larson as possible — speaking with Ira Weitzman, who had fought with Larson over production issues; Roger Bart, who sang backup for the one-man show of Tick, Tick… Boom!; composer Steven Sondheim (who was also a mentor to Miranda); Matt O’Grady (his best friend) and even past girlfriends.

“They knew we weren’t going for sainthood in making this movie, given it is semi-autobiographical,” he points out. Miranda wanted to create the right world for this intimate story, sourcing the very furniture that sat in Larson’s closet-sized apartment. He also wanted the film to be a springboard for Larson’s other music that the world never got to see. He hoped that, if the film was done right, the credits would read ‘score by Jonathan Larson’, owing to the incidental music such as the background score in the diner scenes or the dialogue scenes between him and other characters. For example, in a scene of Michael and Jonathan driving, one can hear a talk-radio news theme song which Larson actually wrote for CNN which the network never wound up buying.

As Miranda delves into the essence of the story, he talks with his hands as though he is physically unravelling how intricate and intimate the story of Larson is. “It’s the story of a guy spending years writing a show no one got to see. What do you take out of that? Well, the first is you write a show called Tick, Tick… Boom! and say, ‘No one is making my things!’ [laughs] So much of Tick, Tick… Boom! is inadvertently a portrait of this great young man while he was still finding his voice — and you really feel his influences here.”

He motions to his left, offering examples: “This sounds like the work of composer Steven Sondheim,” and then to his right, “The structure is similar to Company and Sunday in the Park with George,” then brings it forward, “And then you hear songs and think ‘This sounds like Rent but it’s not Rent yet!’ I’m thinking of the song ‘No More’, which could be a ‘Rent B-side’ — maybe it was!” 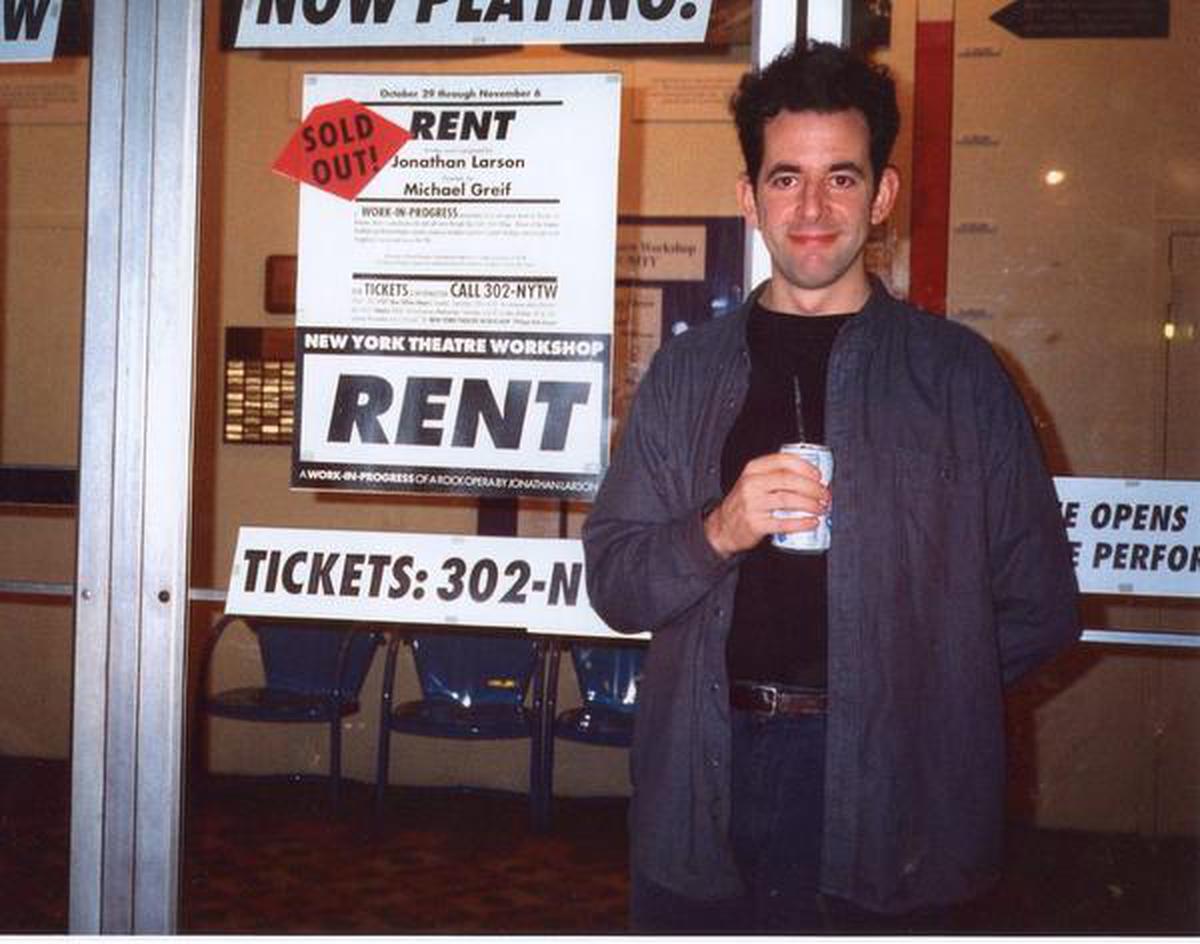 Notably in Tick, Tick… Boom!, audiences see Larson going through waves of difficulty sticking to his dream of Superbia, while his girlfriend Susan (Shipp) has taken a lucrative job teaching dance to children of wealthy families and his best friend and roommate Michael (de Jesús) forgoes a career in acting for a well-paying position as a research executive.

Having always intended for this tandem storyline to bring balance, he says, “I don’t know that Jonathan could see from his perspective, but Michael and Susan aren’t necessarily wrong in the choices they make. You did not ‘sell out’; if you’re a dancer as Susan is, you’re a dancer anywhere in the world. Being in New York doesn’t define you as a dancer. For Michael, having security in a time of insecurity and having a job that gives you health insurance especially in [the United States] where it’s not always guaranteed, is not the wrong choice.”

He settles down and ponders before concluding, “We are grateful for Jonathan’s stubbornness and ability to find the resources to get back up and keep writing. I get hopeful with stories like that; this guy hasn’t even started writing Rent yet and he was able to find the inner resources to get back on the horse, get back at the piano, and start again. And that’s a lesson we are always learning.”