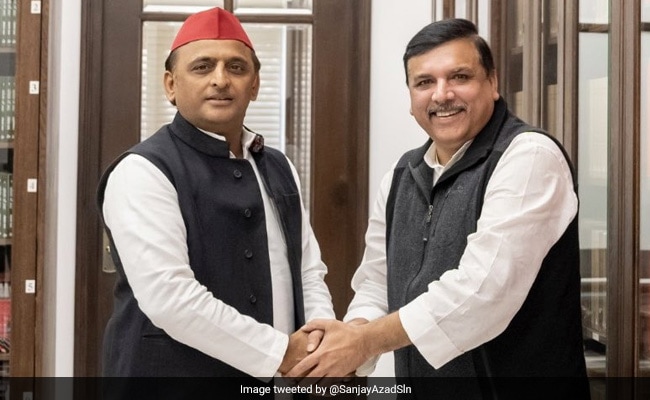 AAP’s Sanjay Singh had a much-publicised meeting with Akhilesh Yadav in July too.

Aam Aadmi Party leader Sanjay Singh met Samajwadi Party chief Akhilesh Yadav in Lucknow today. Less than 24 hours ago, Mr Yadav and Rashtriya Lok Dal’s Jayant Chaudhary posted photographs of their meeting, also in Lucknow, to hint that an alliance between their parties was almost done ahead of the crucial 2022 assembly election in India’s most populous state.

Mr Yadav, who emerged as the principal challenger to the Yogi Adityanath-led BJP government in Delhi, has already said on record that the Samajwadi party will not ally with a larger party ahead of the state elections.

This is a marked departure from his strategy over the last few elections. The Samajwadi party had an alliance with the Congress for the 2017 state election and Mayawati’s BSP for the 2019 Lok Sabha polls — the BJP swept both elections.

After the meeting, the Aam Aadmi Party claimed that talks have been initiated with Akhilesh Yadav for a common platform against the BJP.

But no confirmation came from the Samajwadi Party or Mr Yadav.

Sanjay Singh, a Rajya Sabha MP of the Aam Aadmi Party, had a much-publicised meeting with Akhilesh Yadav in July too.

This will be the Aam Aadmi Party’s first contest in Uttar Pradesh assembly election. The party recently held a series of “Tiranga yatras” — the most prominent of them in the temple town Ayodhya. Delhi Chief Minister Arvind Kejriwal is slated to address a rally in Lucknow in the coming days.

Over the last few months, Akhilesh Yadav has tied up with the regional outfit S-BSP or the Suheldev Bharatiya Samaj Party, headed by former BJP ally Om Prakash Rajbhar. The S-BSP has influence on at least 30 to 40 seats in Purvanchal or eastern UP, a region with 150 plus assembly seats the BJP had swept in the last election.

Mr Rajbhar was a former cabinet minister in the Yogi Adityanath government and his party has three other MLAs.

Mr Rajbhar says he received no respect from the NDA and that is why he has switched over to an alliance with the Samajwadi Party ahead of this election.

Another regional outfit, the Apna Dal (Kamerawadi), headed by Krishna Patel, the mother of Union minister Anupriya Patel, announced today that they have entered into an alliance with the Samajwadi Party for the 2022 election.

Anupriya Patel heads a separate faction of the Apna Dal and is an NDA ally. This claim has not been confirmed by the Samajwadi Party yet, but it is another indication of Akhilesh Yadav’s desire to tie up with a host of regional outfits ahead of the election.