The makers of Disney’s ‘Encanto’ talk about blending otherworldly folklore with joint-family dynamics and Colombian culture, and why actor Stephanie Beatriz was right for the lead role of Mirabel

A house that breathes magic sounds like something out of a fairy tale. The multi-elemental home in Encanto certainly achieves that as it emits a warming glow from within – just what the first look trailer offered back in December 2020. Now, less than a year later, audiences can find out just what that magic entails.

Also Read | Get ‘First Day First Show’, our weekly newsletter from the world of cinema, in your inbox. You can subscribe for free here

Encanto, written by Lin-Manuel Miranda and set in the vivid greenery of Colombia, follows the Madrigal family, whose house (known as the Encanto) is imbued with magical powers. So when each family member comes of age, the Encanto blesses them with individual powers. However, at the centre of this story is the only non-magical member: the optimistic yet ever-yearning Mirabel (Stephanie Beatriz) who comes across as a potential danger to the Encanto.

During a virtual interaction with The Hindu, the minds behind Encanto — directors Byron Howard, Jared Bush, and Charise Castro Smith (the latter two are also co-writers), assistant production designer Lorelay Bové, and heads of animation Renato dos Anjos and Kira Lehtomaki — elaborate on their labour of love, detailing the storylines, the world and character creation and animation styles.

While Encanto is blanketed by some mesmeric magical realism, the core of the story is family. “For this movie, we leaned into magical realism which is a huge part of Colombian literary traditions,” says co-director Jared Bush. He adds, “It’s about taking emotions and lending that to something beyond reality. Between the gifts our characters have and the way the mystery expands in this magical house, there are still themes we can relate to that are heightened. Anytime we felt it stopped being relatable, we hit the brakes. This movie – a family story first, everything else second – has to function as if there was no magic in this world at all.”

“Encanto’s central theme is really about the perspectives of family. So, that compelling concept lends itself to a lot of thinking over the years and it was a joy to keep coming back to that through the different characters,” says Castro Smith.

But one character stands out to the makers: Mirabel, played by Beatriz.

Mirabel Madrigal (Stephanie Beatriz), the only non-magical member of her family

Howard, who had long been impressed with Beatriz’s portrayal of the stone-faced and ever-cool Rosa Diaz on Brooklyn Nine-Nine, calls the actor “a home run for Mirabel.”

He recalls, “Stephanie was a huge surprise to us; when she auditioned, I had to double-check the call sheet to make sure this was the same person. [laughs] Her personality and natural way of speaking is so lovable, quirky and disarming that she inhabited Mirabel instantly, even ough the animation of her movements and expressions.”

Bush adds, “Lin-Manuel Miranda – who’s written not just the film but the original songs too – has known Stephanie for decades, so when he found out she was doing it, he went ahead and changed some lyrics to hit her sweet spots; when you hear her sing, you see her personality come out.”

He reveals, “At Disney, we cast people based on who they actually are so we find people who really are the character versus having someone come in and play someone vastly different. So when they improvise, it feels organic to that character.”

The co-directors and the animators worked closely to make sure the acting and the animation felt like a single confluence, says Howard, who describes, “We made very specific asks of the animators and the acting in Encanto; there are some very personal and nuanced scenes where the tiniest eye movement can change how you feel. We also ensured the incredible Colombian movement in the choreography was brought out to represent that.”

The character was with the team from the concept stages. Once Mirabel’s character model was developed they also had to further work on her after her character was established which lends to her journey in Encanto. “She was the most complex character in terms of getting to where she finally is now,” explains Do Anjos, “Stephanie’s voice and performance are so rich to add on to the animation: the way she moves her eyes and hands. There are these amazing records of her in the booth.” Walt Disney Animation Studios’ “Encanto” introduces the Madrigals, a compelling and complicated extended family who live in a wondrous and charmed place in the mountains of Colombia. ‘Encanto’ features the voices of (clockwise starting from center) Stephanie Beatriz as the only ordinary child in the Madrigal family; Ravi Cabot-Conyers, Rhenzy Feliz and Adassa as Mirabel’s cousins Antonio, Camilo and Dolores, respectively; Mauro Castillo and Carolina Gaitan as Mirabel’s uncle and aunt, Félix and Pepa; María Cecilia Botero as Mirabel’s grandmother, Abuela Alma; Angie Cepeda and Wilmer Valderrama as Mirabel’s parents, Julieta and Agustín; and Jessica Darrow and Diane Guererro as Mirabel’s sisters Luisa and Isabela.

Lehtomaki elaborates on how Mirabel’s internal landscape affected their work as animators. “Shel was a hard puzzle to solve because she’s charming and exuberant yet she’s also dealing with this heaviness – wondering why she is not special – as she is surrounded by an extraordinary family. Behind closed doors away from her family, she’s one way, and when she’s out in the open with them, she’s another way.”

She points out, “We had to figure out what she was like in each situation and how that affects her locomotion. The joy is in the details for us; animators are observers – hopefully in the least creepy way possible – and we’re fascinated by ‘oh, when your lips close, your nose comes down a little bit’.”

Given the vibrant 3D and CG world of Encanto, one cannot help wonder what would the world of Encanto look like in 2D? Having started his career at Disney in 1994, Howard has worked on some of the fans’ favourites such as Pocahontas, Mulan, Lilo & Stitch and Brother Bear.

Howard recalls the “incredible” journey of animation, from 2D to 3D across the past 15 years. “I’ve seen the control and nuance of animators while still being tied to the traditions of 2D animations… During parts of Disney’s history over the last 98 years, we’ve had these peaks where we’ve seen masters of 2D animation and now we’re seeing masters of CG animation and we are fortunate to land there with our film.”

There is some 2D animation in the film, particularly where legendary 2D animators Mark Henn and Rachel Bibb worked. Henn is responsible for a lot of the designs of princesses such as Ariel, Belle, Princess Jasmine and Mulan, as well as other notable characters such as Young Simba in The Lion King. Howard, along with one of Encanto’s head animators Renato dos Anjos, pulled at their 2D animator roots a bit, hoping to give Encanto a more hand-drawn texture than other Disney films. But Henn’s hand in Encanto elevated some scenes such as when a mischief of rats came together to form shadows in Bruno’s (John Leguizamo) room.

To create the worlds of Encanto, the makers hired an Art Director of Environments (Mehrdad Isvandi) and worked with a local botanist to make sure every bit of natural space was authentic to Colombia. To understand the world that could be Encanto, Howard and Bush took a two-week recce trip to Colombia with writer Lin-Manuel Miranda; they travelled from Cartagena on the north coast to the more verdant central regions. 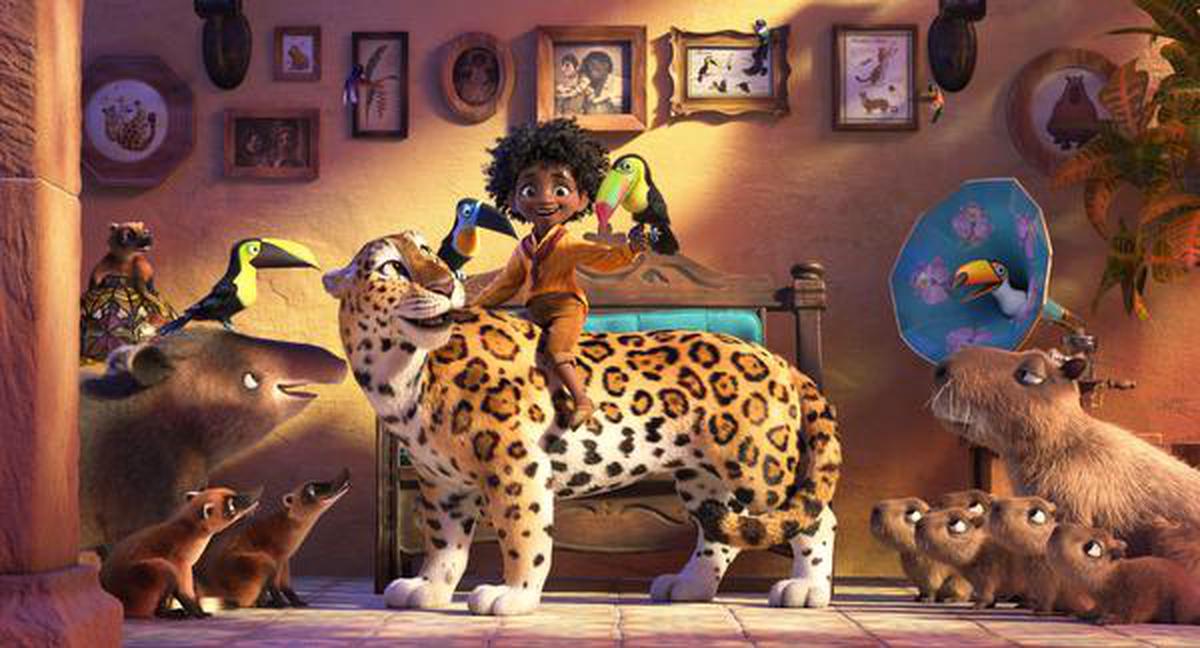 In Encanto, as each family member is imbued with magical power, they are also gifted with a massive room in the home. For example, Mirabel’s sister Isabella’s power is to grow plants and make flowers bloom, so her room is a cornucopia of purple and pink blossoms. Meanwhile little Antonio’s power is to speak with animals so his room is a vast jungle inhabited by various fauna.

Assistant production designer Lorelay Bové, says the hardest room was Antonio’s room. “It was challenging because of the plants we had to get exactly right, inspired by the region. We worked with a botanist, which was a great help; we would show him photos of the flora that interested us and he would identify them.”

Most Disney feature films – like Academy Award-winning Soul and Raya and the Last Dragon – take a few years to complete. Does it not get tiresome at any point?

“ As there are so many different stages in the film, we’re designing new things all the time, some of which we have to learn on the spot,” Bové responds, “Designing a specific room such as Isabella’s room with flowers endemic to Colombia or Antonio’s jungle room, never becomes homogeneous because there’s so much to think about for each space.”

With a smile, Howard wraps it up, “Back when the idea for Encanto first surfaced, it was very much about rallying the team around a compelling idea. As we got more amazing artists and technicians involved, shepherding new ideas into the future, we saw how the film evolved till it came out. The refreshing part of it is the new challenges, problems, ideas and rewards.”

Encanto is now running in theatres.