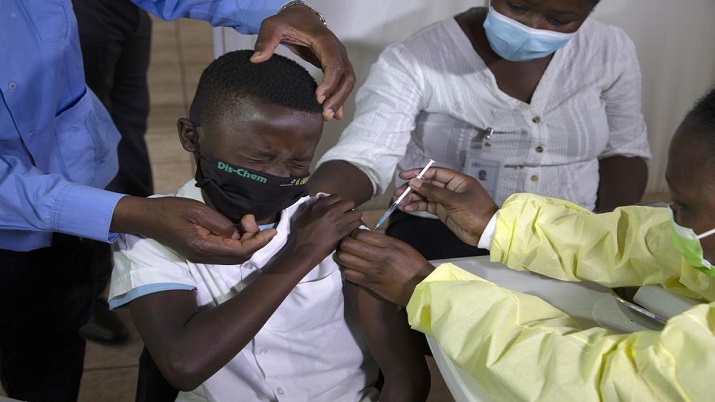 There are no vaccines currently available to administer to children under the age of 12 in South Africa as children under five years constitute the second highest at-risk group after those over 60 as the Omicron variant takes a vice-like grip over the country, the Health Department has said.

“As far as vaccinating under the age of 12 is concerned, there is no vaccine registered in South Africa so far. We await applications from the manufacturers for use of vaccines at different ages and different boosters and intervals,” said Dr Nicholas Crisp of the Department of Health.

Countries around the world are currently expanding their vaccination programmes to include young children as infections surge due to the Omicron variant.

“At the moment we know there are some other countries that have started doing that, but we have not had an application to my knowledge. We did get an indication that Pfizer was going to make an application in the early parts of next year, so it is not likely that we will have that in the very near future,” Crisp said during a media briefing on Friday.

South African experts on Thursday expressed concern about the rising number of COVID-19 infections among young children, even as the country recorded a further 16,055 infections and 25 deaths overnight on Friday.

“Now, at the start of this fourth wave, we see quite a sharp increase across all age groups, but particularly in the under-fives,” said Dr Waasila Jassat of the National Institute of Communicable Diseases (NICD).

“The trend that we are seeing now that is different from what we saw before is the particular increase in hospital admissions in children under five years,” Jassat added.

Dr Michelle Groome, from the NICD, said more research would be done to investigate the reasons for this phenomenon.

“It is still very early on in the wave. At this stage it has just started in the younger age groups and we will know more (by) monitoring this age group in the coming weeks. We do just need to highlight the importance of surge preparedness to also include paediatric beds and staff,” Groome explained.

ALSO READ: South Africa: Concern over COVID infections in children under 5 as daily cases shoot up