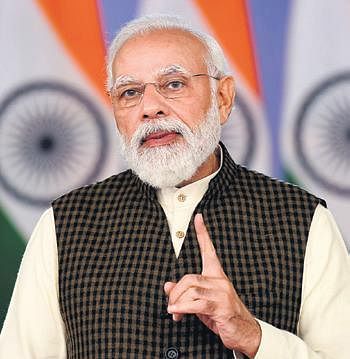 NEW DELHI: Prime Minister Narendra Modi on Friday said new-age technologies such as social media and cryptocurrencies should be used to empower democracies. Speaking in a virtual address at the Summit for Democracy hosted by US President Joe Biden, Modi said India would be happy to share its expertise towards meeting the aspirations of people.

“We must … jointly shape global norms for emerging technologies like social media and cryptocurrencies so that they are used to empower democracy, not to undermine it,” Modi said. This is the second time in three weeks that he called for working together on the need to regulate cryptocurrencies.Referring to Abraham Lincoln’s famous quote,  the PM said, “Democracy is not only of the people, by the people, for the people but also with the people, within the people.”

Modi elaborated that democracy is basically about what citizens think. “Structural features like multi-party elections, independent judiciary and free media are important instruments of democracy. However, the basic strength of democracy is the spirit and ethos that lie within our citizens and our societies,” he said.“India would be happy to share its expertise in holding free and fair elections and in enhancing transparency in all areas of governance through innovative digital solutions.”

Modi began by saying that he is proud to represent the world’s largest democracy at the summit. He said democratic spirit is integral to India’s civilisational ethos which could not be suppressed even after centuries of the colonial rule. “It again found full expression with India’s independence, and led to an unparalleled story in democratic nation-building over the last 75 years,” he said.

“The India story has one clear message to the world. That democracy can deliver, that democracy has delivered, and that democracy will continue to deliver,” he added.Modi said by working together, democracies can meet the aspirations of citizens and celebrate the democratic spirit of humanity. “India stands ready to join fellow democracies in this noble endeavour,” he said, adding that there is much to learn from each other.