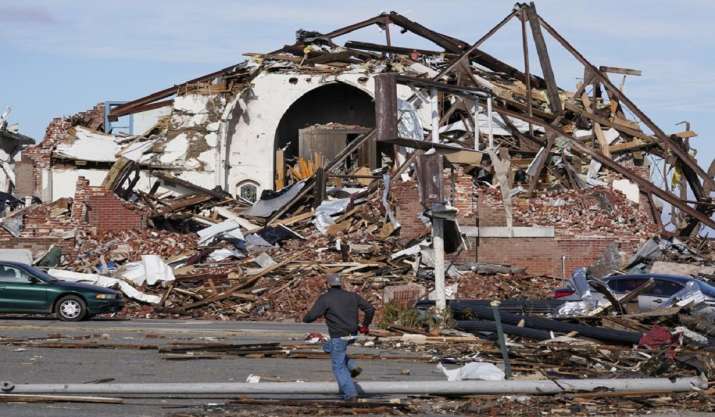 A monstrous tornado, carving a track that could rival the longest on record, ripped across the middle of the U.S. in a stormfront that killed dozens and tore apart a candle factory, crushed a nursing home, derailed a train and smashed an Amazon warehouse.

“We had to, at times, crawl over casualties to get to live victims,” said Jeremy Creason, the city’s fire chief and EMS director.

In Kentucky alone, 22 were confirmed dead by Saturday afternoon, including 11 in and around Bowling Green. But Beshear said upwards of 70 may have been killed when a twister touched down for more than 200 miles (320 kilometers) in his state and that the number of deaths could eventually exceed 100 across 10 or more counties.

The death toll of 36 across five states includes six people in Illinois, where an Amazon facility was hit; four in Tennessee; two in Arkansas, where a nursing home was destroyed; and two in Missouri.

If early reports are confirmed, the twister “will likely go down perhaps as one of the longest track violent tornadoes in United States history,” said Victor Genzini, a researcher on extreme weather at Northern Illinois University.

The longest tornado on record, in March 1925, tracked for about 220 miles (355 kilometers) through Missouri, Illinois and Indiana. But Genzini said this twister may have had touched down for nearly 250 miles (400 kilometers). The storm was all the more remarkable because it came in December, when normally colder weather limits tornadoes, he said.

Debris from destroyed buildings and shredded trees covered the ground in Mayfield, a city of about 10,000 in western Kentucky. Twisted metal sheeting, downed power lines and wrecked vehicles lined the streets. Windows and roofs were blown off the buildings that were still standing.

The missing at the candle factory included Janine Denise Johnson Williams, a 50-year-old mother of four whose family members kept vigil at the site Saturday.

“It’s Christmastime and she works at a place that’s making candles for gifts,” her brother, Darryl Williams, said. “To give up the gift of life to make a gift. We haven’t heard anything, and I’m not presuming anything. But I’m expecting for the worst.”

He said Johnson Williams called her husband overnight to report the weather was getting bad, the last time anyone heard from her.

Kyanna Parsons-Perez, an employee at the factory, was trapped under 5 feet (about 1.5 meters) of debris for at least two hours until rescuers managed to free her.

ALSO READ: At least 70 feared dead after tornado hits US state of Kentucky