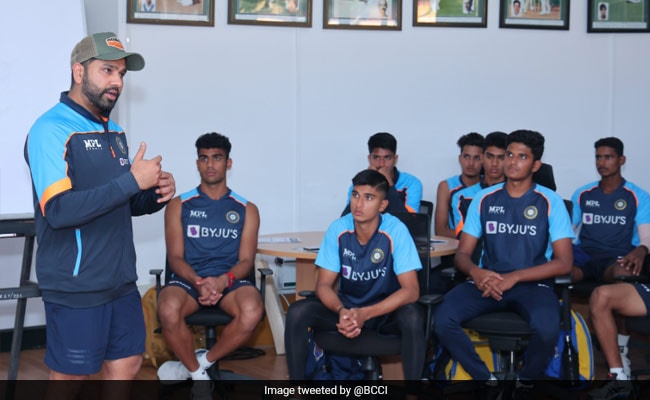 Newly-appointed India ODI and T20I captain Rohit Sharma spent some quality time with India’s U19 cricketers at the National Cricket Academy in Bengaluru. The opening batter who is currently undergoing a rehab at the NCA for a hamstring injury, addressed India’s junior cricketers, who are attending a preparatory camp at the academy. Taking to their Twitter, the Board of Control for Cricket in India (BCCI) shared some pictures from the NCA with Rohit interacting with the young players.

“Priceless lessons #TeamIndia white-ball captain @ImRo45, made most of his rehab time as he addressed India’s U19 team during their preparatory camp at the NCA in Bengaluru,” tweeted BCCI.

📸 📸 #TeamIndia white-ball captain @ImRo45 made most of his rehab time as he addressed India’s U19 team during their preparatory camp at the NCA in Bengaluru. pic.twitter.com/TGfVVPeOli

India U19 cricketer Yash Dhull had earlier shared a photograph with Rohit.

Rohit was ruled out of the three-match Test series in South Africa with a hamstring injury. He was replaced in the squad by Priyank Panchal, who was already in South Africa as part of the India A squad.

Rohit has been appointed as India’s full-time white-ball captain.

On the other hand, Virat Kohli-led Indian red-ball squad is in Johannesburg, South Africa to lock horns with Proteas in the three-match Test series.

India and South Africa will lock horns in the Test series which gets underway from December 26.