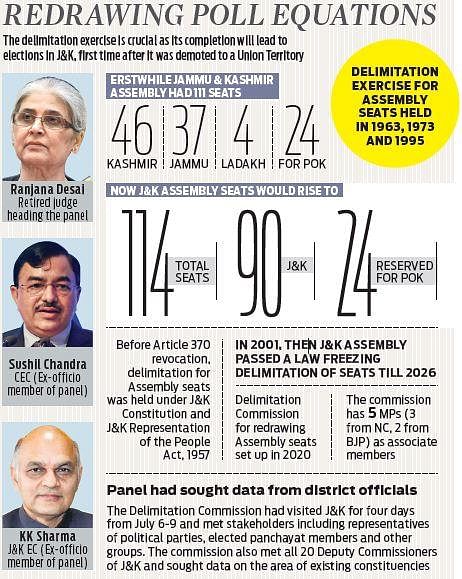 SRINAGAR: All eyes are on the December 20 meeting convened by the Delimitation Commission with its five associate members from Jammu and Kashmir. The meeting assumes significance as the commission is set to share its findings on redrawing boundaries of Assembly seats and the list of reserved constituencies in J&K with the five Lok Sabha members from the Union Territory.

The NC parliamentarians had skipped the earlier meeting of associate members convened by the commission in February this year by saying that the delimitation exercise is taking place under the J&K Reorganisation Act, which the party and some others have challenged in the Supreme Court.

Sources said the Delimitation Commission could share documents on redrawing of 90 Assembly seats in J&K with the associate members.  The commission has also identified the seats to be reserved for Scheduled Castes and Scheduled Tribes in J&K and could share the details with the associate members also, the sources said. The delimitation exercise is crucial as its completion will lead to holding of elections in the UT.

The Delimitation Commission headed by Justice (Retd) Ranjana Prakash Desai was formed by the Centre last year. The commission was tasked to complete the delimitation exercise by March 2021 but was granted a year’s extension in view of Covid-19 situation in the country in 2020.

After the repeal of Article 370 and bifurcation of J&K state into two UTs by the enactment of Jammu and Kashmir Reorganisation Act 2019, the J&K Assembly’s strength rose from 107 to 114 including 24 seats for PoK. Two women MLAs will be nominated to the House, which was the position earlier also. The delimitation exercise is being carried out as per 2011 census. As per 2011 census, J&K had a total population of 12,541,302. Of this Kashmir had 6,888,475 while Jammu had 5,350,811 population.
Reservation for SC, ST

Will Pandits get reservation?

The big question is whether the Delimitation Commission would also reserve some seats for Kashmiri Pandits who migrated en masse from Kashmir after eruption of militancy in 1990 and are living in Jammu, Delhi and other parts of the country. Although the Act does not provide for any reservation to the migrant Pandits, the commission would also be seriously looking into the ways and means to give due representation to the community in the Assembly. According to legal experts, the reservation for Pandits in the Assembly would require amendments in the Constitution, which has not been done by the Centre so far.