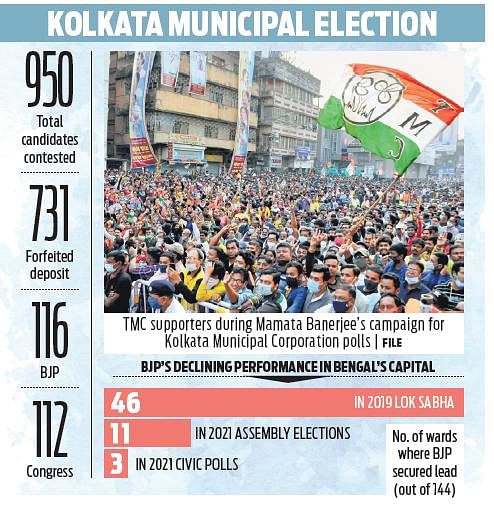 KOLKATA:  In the just concluded Kolkata Municipal Corporation polls, independents and BJP candidates suffered the most by way of forfeiture of deposit amount. While the saffron camp topped the list of parties whose candidates lost their deposit, Congress came next in the list. The Left Front’s performance was better in terms of securing the deposit compared to the two national parties.

The deposit of BJP’s 116 candidates was forfeited. The party had fielded candidates in 142 out of 144 wards. Deposit is forfeited if a candidate fails to bag one sixth of the polled votes.  “It is a fact, it was a poor show of our party in the civic polls.

In 2010 when our party had no MLA in the state, we bagged three out of 144 wards in Kolkata municipal election. This time with a contingent of 70 MLAs and 17 MPs, the party failed to bag more than three seats in the civic body. In the previous civic poll in Kolkata in 2015, out party performed better by wining in seven wards,” said a BJP leader.

The election commission receives a deposit of Rs 500 each for general category candidates while the sum is `250 for women candidates and SC candidates in the civic polls. Political observers in the state capital felt the increase in CPI(M)’s vote share was responsible for the saffron camp’s unimpressive performance.

“BJP’s rise in Bengal in the previous two elections was a contribution of erosion in LF’s vote bank. The BJP bled badly in Kolkata civic polls because the LF got back a section of its earlier vote share,” said political science professor Dr Bishnupriya Dutta Gupta.

Congress stages strong show in Raj civic elections
Jaipur: The ruling Congress has put up a strong show in Panchayat elections held in four districts of Rajasthan, while the BJP faced a crushing defeat in Sri Ganganagar bordering Punjab due to the impact of the farmers’ agitation. The Congress and BJP won two Zila Parishads each, but the grand old party fared far better in Panchayat Samitis, winning in 14 out of the total 30 in the four districts, while the BJP got a majority in eight. The saffron party captured the Kota and Baran district councils, while the Congress won Sri Ganganagar and Karauli districts. In the eight Panchayat Samitis where neither Congress nor BJP got a clear majority, independents will play a key role.