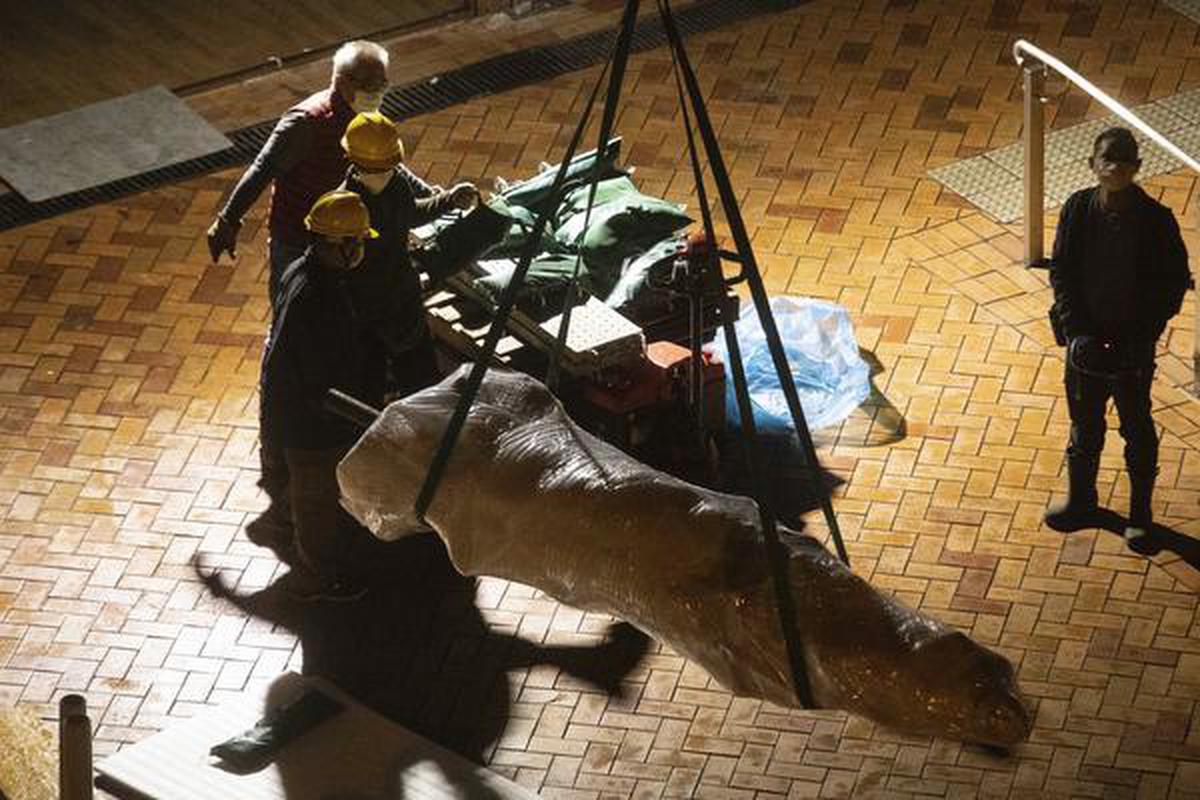 Pillar of Shame, a memorial to the victims of the Tiananmen crackdown, dismantled in the dead of night

Late into the night on Wednesday, a construction crew quietly worked to dismantle one of Hong Kong’s most distinctive statues and works of art.

The timing of the statue’s removal — as well as the scaffoldings carefully put in place to obscure any views of the process — underlined the sensitivity of the decision by Hong Kong University (HKU) to remove what was a popular fixture on its campus for close to 25 years.

Explainer | Why did Hong Kong remove a Tiananmen memorial?

The Pillar of Shame, a haunting eight-metre tall sculpture showing intertwined bodies with hollowed eyes and open mouths — an anguished mass of humanity — was created by Danish artist Jens Galschiot as a tribute to the victims of China’s crackdown in Tiananmen Square in June 1989.

It has been at HKU since 1997, installed shortly after one of Hong Kong’s annual June vigils at Victoria Park, where thousands gathered every year to mark the anniversary.

The “Pillar of Shame” statue, a memorial for those killed in the 1989 Tiananmen crackdown, is removed from the University of Hong Kong, on December 23, 2021.

The vigil itself had been symbolic of Hong Kong’s special status under the “one country, two systems” model that granted it freedoms that are denied on the mainland, where commemorations of June 4 are banned.

The vigil did not take place in June this year for the first time, with police cordoning off the park.

If the end of the vigil was seen as a significant symbol of one of Hong Kong’s distinct freedoms slipping away, the removal of the statue has now been added to the list.

Hong Kong’s changes, including the shutting down of newspapers and an overhaul of the curriculum in schools and colleges, have come thick and fast in recent months after Beijing, in June 2020, passed a new national security law that lists stiff penalties for subversion and secession.

The passing of the law followed months of pro-democracy protests in 2019 calling for direct elections, including for the top post of Chief Executive, who is now nominated.

Beijing has also overhauled the electoral system, reducing the share of directly elected representatives in Hong Kong’s Legislative Council (LegCo), down from 50% to 22%. The new rules also introduced a review committee to decide on the eligibility of candidates to ensure only “patriots” could run for office.

The first “patriots only” polls were held on Sunday, with most of the pro-democracy candidates not taking part, either because they had been charged over their involvement in the 2019 protests or because they had given up politics entirely. The elections were swept by pro-Beijing candidates, while the turnout among voters was the lowest on record.

On Monday, Beijing published a lengthy white paper hailing Hong Kong’s democracy and freedoms. Three days later, HKU’s Council announced it would take down the statue citing a “risk assessment” and “legal advice” that “the continued display of the statue would pose legal risks”.

By Thursday morning, the statue was gone. It will be kept storage and likely returned to its creator. In a statement, the sculptor, Mr. Galschiot, said he would claim compensation for any damages.

The university’s statement explaining the decision, the South China Morning Post reported, mentioned a “Crimes Ordinance enacted under the Hong Kong colonial government” that was in charge until the 1997 handover. Why it took 25 years to come to that conclusion was left unsaid.