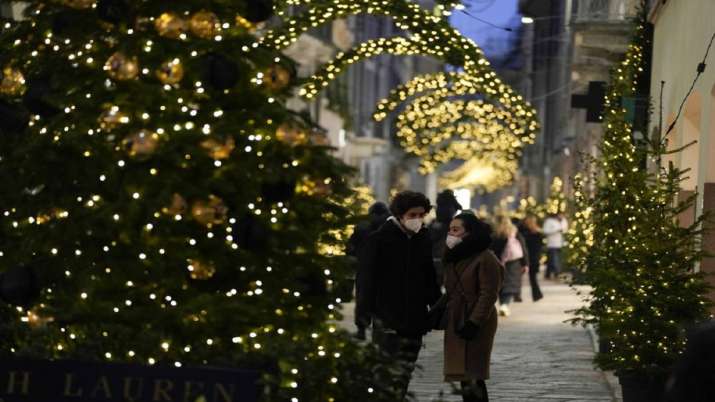 Italy on Thursday tightened anti-pandemic rules for the Christmas and New Year holidays amid concerns over rising Omicron cases across the country. The cabinet unanimously approved a decree to introduce new restrictions which will enter into force in the next few days, including prohibiting public gatherings for Christmas and New Year’s Eve.

The step came after several mayors and regional authorities had cancelled all public events in the festivities. According to the new rule, discos and nightclubs have to stay closed until January 31, 2022.

The validity of the health green pass certificate is reduced from nine months to six months in order to stem the spread of the highly contagious Omicron variant, Health Minister Roberto Speranza told a press conference. The decree also cuts from five months to four months the required time between the completion of full vaccination (two doses) and the administration of a booster dose.

“This is a difficult phase… and we are implementing measures that we think will provide further protection to citizens and to our public health system,” the minister said.

Face masks are required in every outdoor place, plus to use only FFP2 masks- those providing more protection- on public transports and public indoor places.

According to earlier restrictions imposed on December 6, only those vaccinated and recovered, who hold the so-called “super Green Pass,” would be allowed to sit at restaurants and bars, theatres, discos, stadiums and other sports facilities. Yet, the rapid increase in new cases combined with the forthcoming Christmas and New Year holidays prompted authorities to move further on.

The new restrictions were decided after the National Health Institute (ISS) on Thursday shared with the cabinet the results of a preliminary survey on the spread of the highly contagious Omicron variant. According to data based on some 2,000 swabs carried out on Dec. 20, Omicron represented 28 percent of new infections.

“Although preliminary, the estimate confirms the great rapidity of the variant spread, which seems to produce large outbreaks in a short time, and it is expected to become predominate, as it is already occurring in several other European countries,” ISS president Silvio Brusaferro said in a statement.

Italy has seen an increase in new infections and deaths, yet the daily caseload has so far remained below that of some other major European countries. Nonetheless, the surge is significant, with over 44,500 new infections over the 24 hours on Thursday, which marked the highest daily increase since the beginning of the pandemic.