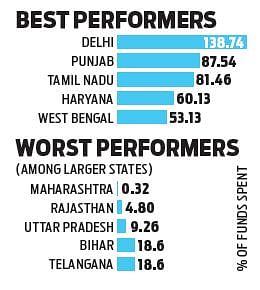 NEW DELHI: Maharashtra is the worst performer among large states, having spent less than 1% of the funds released by the Centre to upgrade health infrastructure to tackle a Covid-19 wave, government data shows.

Nationally, of the Rs 6,075 crore released by the Centre under the emergency Covid response package II so far, only Rs 1,679 crore or just about 27% have been spent by the states.

The scheme is aimed at preventing, detecting and responding to the threat posed by Covid-19 and strengthen national health systems for emergency response.

Bihar, the second most populous state in the country, which is known for its limited health systems, has spent just about 18% of the funds, while Kerala with just about 20% expenditure is also among the disappointing performers.

Under ECRP II, the Centre has committed a fund of Rs 15,000 crore to upgrade health infrastructure and resources across India while the states too will have to cough up Rs 8,123 crore collectively between July 1, 2021 to March 31, 2022.

Statistics shared by the Union Health Ministry on Tuesday to deny claims that it has released only 26% from its share to states, showed that it had released 50% of its share of the funds by August last year.

“The remaining funds will be released to states based on the progress and utilisation of at least 50% of the funds already released,” said the ministry.

So far, only five states have reported expenditure of more than 50% which include Delhi, Punjab, Haryana, Tamil Nadu and West Bengal. Delhi, which has spent 138% of the Central fund released, has contributed a higher amount from its own kitty than stipulated.

Worryingly, there are many states and UTs such as the ones in the north-east, Goa and Sikkim and Andaman and Nicobar Islands which have not spent any funds so far or have spent less than 2% under the scheme.

The government said it is actively pursuing with states for speedy implementation of the ECRP II package and is monitoring physical progress and expenditure on a daily basis.