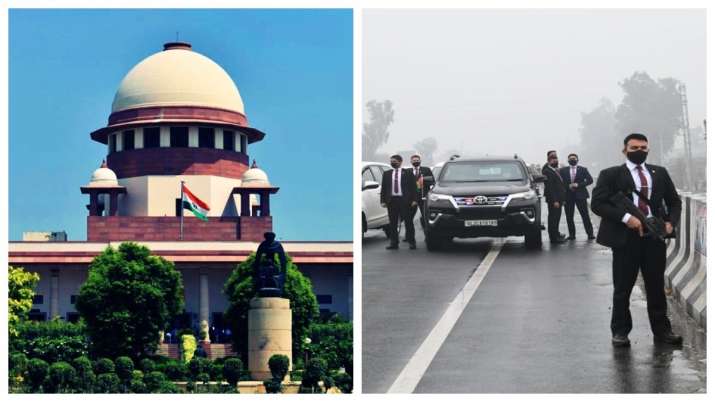 The Supreme Court on Friday directed the Registrar General of the Punjab and Haryana High Court to “forthwith” secure the records, pertaining to security arrangements made for Prime Minister Narendra Modi’s recent Punjab visit, from the state government, its police and central agencies.

A bench headed by Chief Justice N V Ramana also asked the counsel representing the Punjab and the central governments to ask the committees set up by them separately to probe the lapses during the visit of the prime minister to “hold their hands till Monday” when it will hear the plea next. The top court was hearing the plea of an organisation ‘Lawyer’s Voice’ seeking a thorough investigation into the breach in Prime Minister Modi’s security in Punjab and ensuring there is no such event in the future. “The security lapse, as per reliable reports in the print and the electronic media, and as per the Press Information Bureau report of Central government, was clearly intentional and raises a serious question as to national security and the role played by the present political dispensation in the State of Punjab”, said the plea. The plea sought an independent probe into the PM’s security breach in Punjab.

Solicitor General Tushar Mehta, representing the Centre, submitted that some NIA officer should assist the court’s officer in collecting and securing the evidence, which includes wireless messages in connection with PM’s movement in the state. Mehta added that the court officer may find it difficult to pin down on sources, from which information is required. Mehta termed the incident “rarest of the rare issue”.

The bench, also comprising justices Surya Kant and Hima Kohli, has taken note of the plea alleging serious breach in the prime minister’s security that took place in Ferozepur, Punjab, on Wednesday and it had led to the stalling of his cavalcade in Bathinda for around 20 minutes.