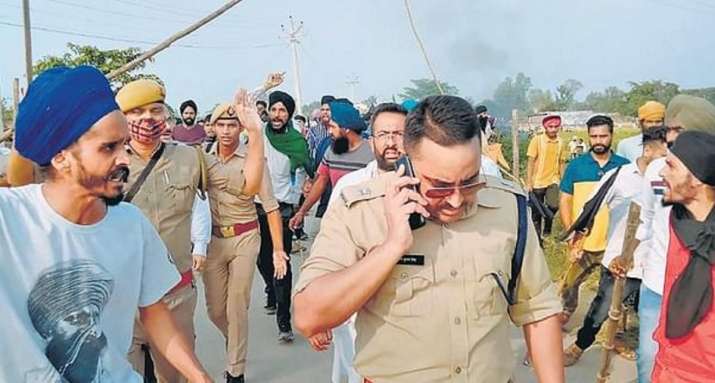 The families of four farmers who were mowed down allegedly by Union Minister Ajay Mishra Teni’s son’s convoy during the October 3 violence last year are now demanding that the case be moved out of Uttar Pradesh.

Talking to reporters on Thursday, Gursevwak Singh, the elder brother of Gurwinder Singh, who was one of the four farmers who died, said: “The case should be transferred to Delhi. We all know that the proceedings are being influenced here. No action was taken against the union minister despite his video threatening farmers having gone viral.

“The Uttar Pradesh government’s attitude is different when it comes to criminals who are from their own party. There is no scope for justice in Uttar Pradesh. That is evident from the way an eyewitness was thrashed and his case was closed by the local police.”

Satnam Singh, the father of 19-year-old Lovepreet Singh, who was also killed in the violence, said: “Despite having all the evidence, we sometimes think that we are fighting a lost battle. We all know that the state is trying to save the accused. The Minister is openly giving statements saying he proved his ‘innocence’ by ensuring the BJP’s win in Lakhimpur Kheri.”

Jagdeep Singh, son of Nachattar Singh who was seen tossed in the air by the speeding SUV, said: “There is no way we can get justice in Uttar Pradesh. The main accused was given bail easily despite the SIT submitting evidence in court calling the incident ‘premeditated’ and ‘not an act of negligence’. It was one of the most heinous crimes in the country.

“We are now going to approach the apex court to get the case transferred to Delhi or elsewhere to ensure justice for farmers.”

On October 3 last year, eight people were killed in Lakhimpur Kheri during violence that erupted when farmers were protesting against Uttar Pradesh Deputy Chief Minister Keshav Prasad Maurya’s visit to the area.

Four farmers were mowed down by an SUV following which the driver and two BJP workers were allegedly lynched by angry farmers.

A journalist also died in the violence that triggered outrage among opposition parties and farmer groups agitating over the Centre’s now-repealed agri laws.

(With inputs from IANS)