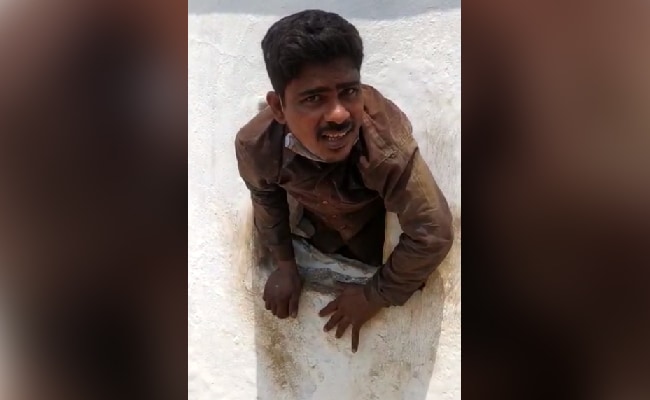 The thief was identified as R Papa Rao by the Andhra Pradesh Police.

A thief in Andhra Pradesh got stuck in a hole he drilled in the wall of a temple for stealing ornaments. The man was caught red-handed after he started shouting for help.

The incident took place in Jadimudi village of Kanchili Mandal, in the coastal district of Srikakulam on Tuesday, when the thief – identified as R Papa Rao by the police – was trying to escape with the ornaments of the Jami Ellama temple.

A video of the incident has gone viral on social media, where the locals are narrating Rao’s situation as he is seen hanging out of the narrow wall opening from the waist up and continuing to plead with them to pull him out.

The man recording the video is heard saying that the man did this “out of greed” and “now can’t get in or go out”.

The 30-year-old had looted the ornaments, but was stuck while trying to get out of the wall opening. He then started crying for help, which alerted the workers on a nearby farm.

They were unable to pull him out and called the police. The cops got the temple opened and pushed the man from the other end of the wall opening. After being freed, he was taken into custody.

“He was stuck for about 15 minutes. We went and got him out and took him into custody,” sub-inspector Chiranjeevi said.

The police said that the ornaments Rao was trying to steal had nine grams of silver.

Rao has been booked under Sections 454 (trespassing or breaking-in) and 380 of the Indian Penal Code (IPC). He already has a few property-related cases pending against him.