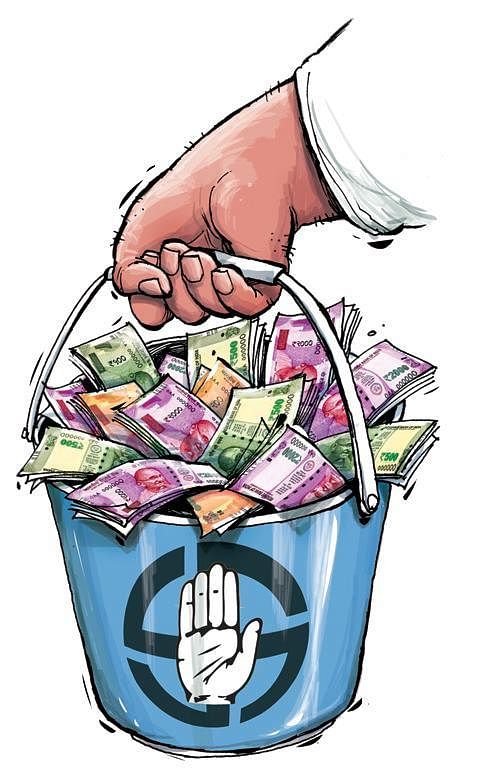 NEW DELHI: Facing massive funds crunch ahead of the big fight for 2024, the Congress is looking at the Left’s Kerala model of fund-raising where bulk of the party funds are collected from the masses through door-to-door campaigns with slips issued against donations.

The idea, suggested by former KPCC chief Ramesh Chennithala, was discussed in detail at the recently held Udaipur Chintan Shivir.

“It is being considered seriously. There are some issues, such as how it can be implemented, how to ensure funds management and transparency etc. It will be discussed at the Task Force 2024 meetings,” party sources said.

According to an audit report submitted to the Election Commission, the Congress party’s income plunged 58% in FY21 to Rs 285.7 crore, from Rs 682.2 crore in the previous fiscal. In FY19, the party’s income was Rs 918 crore.

The Congress is facing acute pressure on the money front, especially after the demise of party treasurer Ahmed Patel, who used to handle party funds through his corporate and other contacts.

Madhya Pradesh Congress chief Kamal Nath has been also handling funds generation but earnings have nosedived in the Modi regime.

Most of the CPI(M)’s funds come from its Kerala unit and there is a joke in party circles that the central party survives on funds from the southern state.

The general rule for the party is that 70% of funding must be from a door-to-door mass-contact funding drive, known as ‘bucket collection’.

However, critics have questioned the credibility of such a fund-raising drive and even the party itself has called for proper maintenance of funds. In 2013, the Kerala unit of CPI(M) collected Rs 8 crore in just two days for establishing the Harkishan Singh Surjeet Bhawan and the EMS Research Centre.

Of the Rs 8 crore, as much as Rs 5 crore was raised through bucket collection with the rest coming from direct contributions from party members.