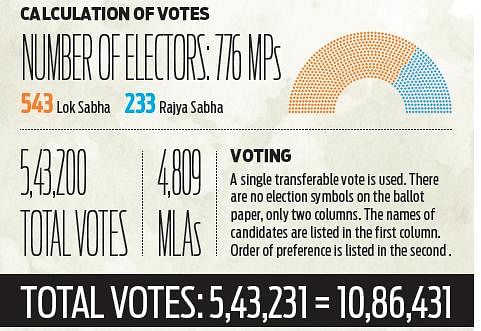 India will have a new President in office on July 25 and the process has already begun, with nominations opening on Wednesday.

Here’s all about how the Republic chooses its First Citizen:

Candidates
BJP on Wednesday opened talks with Opposition parties for a ‘consensus’ candidate and has not yet announced who its nominee will be. The Opposition, despite not having the numbers, is ready for a contest and is scampering to find a face to field against the BJP nominee. Names that are doing the rounds from the BJP side include Draupdi Murmu, Venkaiah Naidu and Arif Mohammad Khan; and Sharad Pawar, Farooq Abdullah and Gopal Krishna Gandhi from the opposition camp

How the number game is poised
The ruling National Democratic Alliance has 440 MPs while the opposition UPA has around 180 MPs, besides 36 MPs of the Trinamool Congress. If calculated roughly, the NDA has around 5,35,000 votes out of a total of 10,86,431 votes of all electors. This includes 3,08,000 votes with the support of its MPs and allies. The alliance is hopeful of support from independent regional parties such as the YSRCP, BJD and AIADMK

Who can become Prez?
Anyone who is an Indian citizen and meets certain additional requirements is eligible to become the President of India. A candidate must be at least 35 years old and should be qualified for election as a member of the Lok Sabha, or Lower House of parliament. The candidate  must not hold an office of profit.

Electors
Members of Parliament (MPs) and Members of Legislative Assemblies (MLAs), including elected representatives from the Union Territories of Delhi and Puducherry, form the electoral college which elects the President

Nomination
At least 50 elected representatives must propose a candidate, who must then be seconded by 50 other electors to run for the President’s office

Secret ballot
Voting is through proportional representation using a single transferable vote system and by secret ballot. The anti-defection law which disallows MPs from crossing the party line does not apply to presidential election

A voting weightage is assigned to an MP and an MLA.  The value of each MLA’s vote is determined based on the population of their state (as per 1971 Census) and the number of MLAs. For instance, an MLA from UP has a value of 208 while an MLA from Sikkim has 7.

The value of an MP’s vote is the sum of all votes of MLAs across the country divided by the number of elected MPs. This value is 700 for each MP in this presidential poll.