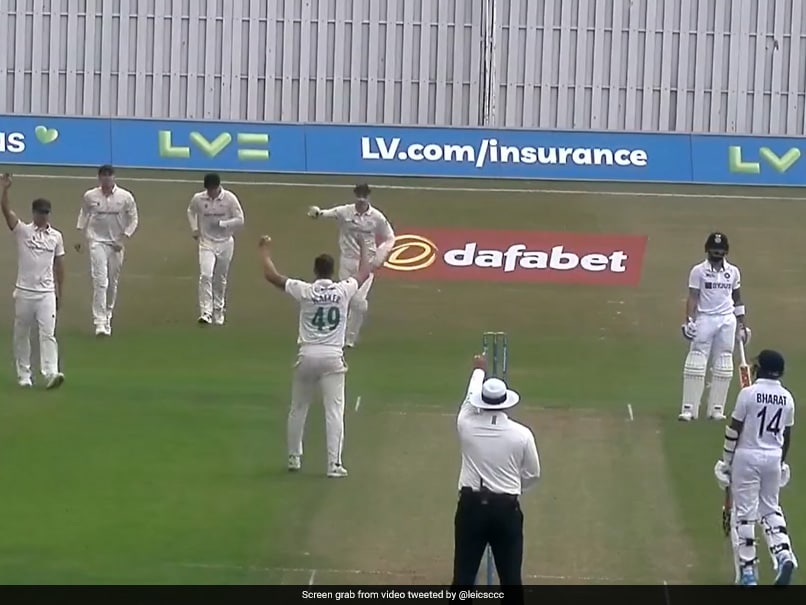 Kohli scored 33 before being dismissed by Roman Walker© Twitter

On Day 1 of the Warm-up Tour game between India and Leicestershire, Virat Kohli looked to be in great touch. After India were five-down in Leicester, the former India captain struck a 50-plus stand with KS Bharat. He was confident with his strokes. He hit four fours and one six. It looked like Kohli was poised for a big score in the match. However, it was not to be. In the 41st over of the Day, while facing fast bowler Roamn Walker, Kohli went for a drive against a fuller delivery.

The ball looked like going past Kohli’s bat and on to the Leicestershire wicketkeeper’s hands. The bowler appealed fervently and after much deliberation the umpire raised his fingers. Kohli initially looked relaxed and was taken aback when he was given out. He then asked the umpire about the dismissal, who said that Kohli was LBW. The batter walked away after that.

Watch: Virat Kohli “Out or not out?”

| Kohli (33) lbw Walker.@RomanWalker17 strikes again! This time he hits the pads of Kohli, and after a long wait the umpire’s finger goes up.

Out or not out?

The Rohit Sharma-led Indian cricket team is aiming to win the Test series against England. The visitors are leading 2-1 in the series that had to be halted midway last year due to a COVID-19 outbreak in the Indian camp. The rescheduled Test will be played at the Edgbaston Cricket Ground in Birmingham from July 1. Before the all-important test, the Indians started their Tour with a warm-up game against Leicestershire on Thursday.

The start to the warm-up game was quite entertaining as Indian openers Rohit Sharma and Shubman Gill stepped on to the field to the tune of bhangra music and dhols. Dancers clad in traditional Punjabi dress could be seen dancing as the players made their way on to the field. Some of the Indian players could not hide their smiles at the situation.