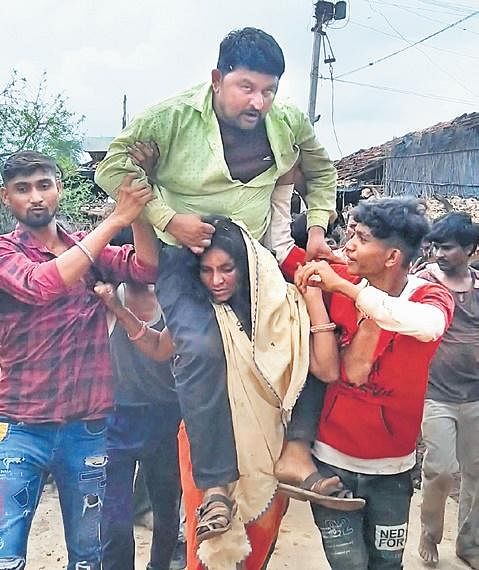 BHOPAL:  Just a day after a tribal woman was set ablaze in Guna district over a land row, another incident of a woman from a tribal community being tortured in public has taken place in Madhya Pradesh.

A 32-year-old woman was beaten up and humiliated by a group of youths and men, including her husband, over her alleged extra-marital affair with a younger man.

The incident happened on Sunday at Borpadav village in Dewas district.

The woman was pulled by her hair by the mob and semi stripped, before being flogged with a leather belt, all with the active involvement of her 35-year-old husband.

The mother of three, was also made to parade through the village, carrying her husband on her shoulders, as a tribal punishment for having an extra-marital affair.

She and her alleged paramour were then forced to wear garlands of slippers and walk around the village.

The torment continued in the presence of the woman’s kids, and other villagers.

The men cheered and filmed the act on their cellphones.

According to Dewas police superintendent Dr Shivdayal Singh, the police rushed to the site after someone dialed the emergency number 100. Constable Shrawan Kumar rushed to the village and escorted the duo to safety in the police vehicle.

“A case was lodged on the complaint of the man accompanying the woman. All the 12 accused, including the husband, were arrested in next few hours,” Singh said.

The National Commission for Women has sought registration of FIR and arrest of all accused in the setting ablaze of a tribal woman over land row in Guna district, So far 5 persons have been arrested in the case.