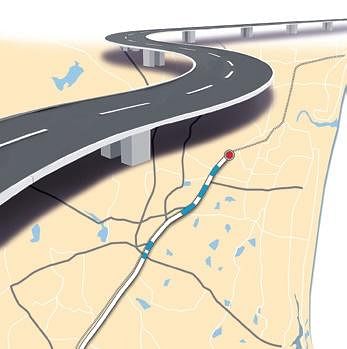 CHANDIGARH: The six-lane elevated highway constructed on NH 248-A, in order to decongest the commute from Delhi to Sohna in Haryana via Gurugram, has been opened for traffic on July 12.

To be operated on a trial basis, the stretch will cut travel time from the existing 60 minutes to between 15-20 minutes. This corridor also forms part of the Delhi-Mumbai Expressway, which connects the capital with Gurugram.

Union Minister for Road Transport and Highways, Nitin Gadkari, said the opening of this 22-km-long stretch NH will help commuters save fuel and time. He said a six-lane access-controlled corridor with a total elevated section of 7 km has been developed on the Gurugram-Sohna corridor constructed at a cost of about Rs 2,000 crore.

Three three-lane service roads have been provided on either side of the highway to cater to local traffic.

Under project-1, a third elevated structure of 324 meters length has also been prepared in Badshahpur.

At the same time, on January 30, 2019, the construction work of the part starting from Bhondsi to Sohna was started under project two. Two elevated roads of 1.84 km and 1.12 km each, a flyover with a length of 1 km and two underpasses have been constructed in the total stretch of 12.71 km of this project.

Along with this, a 750-m light vehicle underpass has also been built for the movement of small vehicles.

The official also said that a 24-lane toll plaza has been constructed. A total of 12 lanes each have been made on both sides in the toll plaza for faster passage.