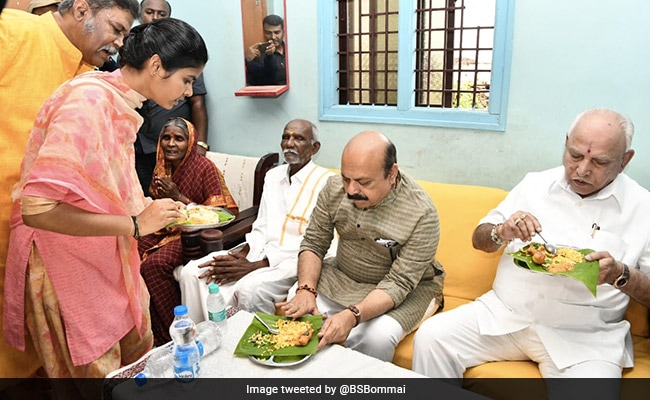 Basavaraj Bommai had breakfast at a Dalit man’s house in Karnataka this morning.

The Congress on Wednesday termed Karnataka Chief Minister Basavaraj Bommai and his predecessor BS Yediyurappa having breakfast at a Dalit’s house, as a “photo-op” for the sake of votes, ahead of next year’s assembly elections  in the state.

While Leader of Opposition Siddaramaiah hit out at the ruling BJP for not doing enough for the Dalits and other backward communities, AICC General Secretary in-charge of Karnataka, Randeep Singh Surjewala took a dig at the Bommai government by highlighting an incident where over a dozen Dalit workers were allegedly assaulted and held captive at an estate in Chikkamagaluru.

“As elections are approaching, they have started remembering Dalits, backward classes, SCs and STs, till now nothing has been done for their welfare by this government. Now for the sake of election and votes, they are visiting areas where Dalits and backward communities live,” Siddaramaiah, who is in Chitradurga to take part in Rahul Gandhi’s ‘Bharat Jodo Yatra’, told reporters in response to a question.

Mr Bommai, Mr Yediyurappa, and other BJP leaders, as part of party’s ‘Jana Sankalpa Yatra’, had breakfast at a Dalit’s house in Ambedkar Nagar of Kamalapura village in Vijayanagara district earlier on Wednesday.

4. Why have Dalit atrocities gone up by 54% over last year? Is it by a design to target SC/ST’s?

5. Is diversion of SCP/TSP Funds of ₹6,500 CR by ur Govt a design to weaken their empowerment?

Wake up, Act or Quit. https://t.co/sgmrJlKwrW

“The ugly stench of Dalit atrocities under Bommai Govt in Karnataka is nauseating – a 54% increase over last year. As Bommai-BSY (Yediyurappa) do photo-op of visiting a dalit house, BJP leader detains 16 Dalits & a hapless women loses her child (sic),” said Mr Surjewala in a tweet.