Manchester City were fined 260,000 pounds ($288,808) by the Football Association (FA) on Friday for their fans’ behaviour after they celebrated last season’s Premier League title win by invading the pitch following victory over Aston Villa. 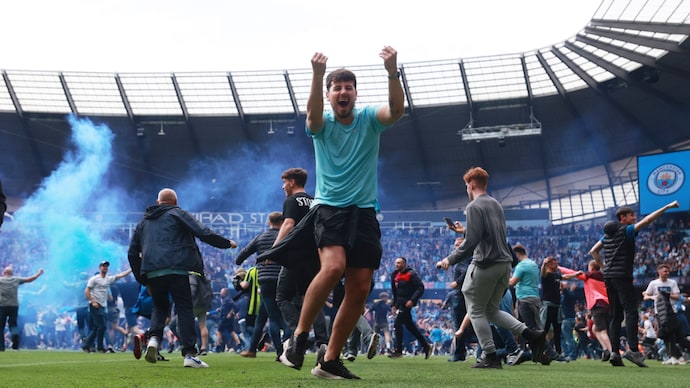 “The club admitted that it failed to ensure its spectators – and all those purporting to be its supporters or followers – conducted themselves in an orderly fashion and refrained from using threatening and violent behaviour while encroaching onto the pitch after the final whistle,” the FA said.

Villa goalkeeper Robin Olsen was attacked during the post-match celebrations. The city issued an apology and launched an investigation into the incident. Greater Manchester Police also charged two men following the pitch invasion for throwing a pyrotechnic onto the pitch and going onto the field. The sanctions were imposed by an independent regulatory commission during a hearing.

The FA fined Everton 300,000 pounds last week for two pitch invasions by supporters in last season’s win over Crystal Palace as well as a clash between an Everton fan and Palace manager Patrick Vieira.

In July, the FA, Premier League and Football League announced stricter sanctions for pitch invasions and the use of smoke bombs and pyrotechnics after an increasing number of disruptions at the end of last season.

The disorder is at an eight-year high in England and Wales according to Home Office figures, after capacity crowds returned following the end of Covid-19 restrictions.