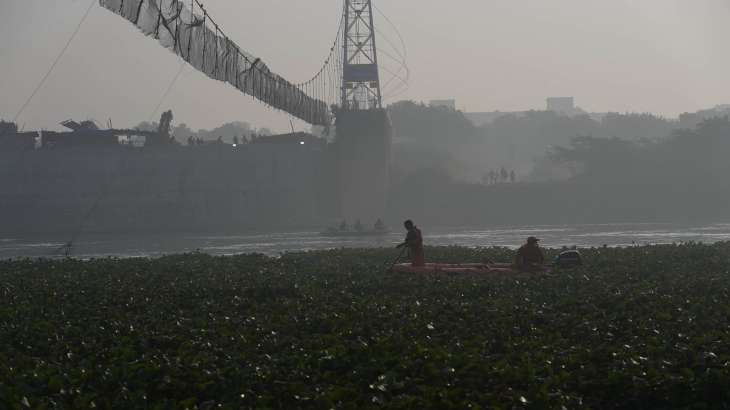 Morbi bridge collapse: The contractors who carried out repairs of the ill-fated suspension bridge at Morbi in Gujarat were not qualified to carry out such jobs, the prosecution told a court in Morbi.

While the bridge flooring was replaced, its cable was not replaced and it could not take the weight of the changed flooring, the prosecution, citing a forensic report, told the magistrate’s court on Tuesday (November 1).

The collapse of the bridge on Sunday (October 30) claimed 135 lives.

Chief Judicial Magistrate MJ Khan remanded four of the arrested accused- two managers of the OREVA Group and two sub-contractors who had repaired the bridge- in police custody till Saturday.

The court remanded five other arrested men, including security guards and ticket booking clerks, in judicial custody as police did not seek their custody, prosecutor HS Panchal said.

Citing a Forensic Science Laboratory (FSL) report, Panchal told the court that forensic experts believed the main cable of the bridge snapped because of the weight of the new flooring.

“Though the FSL report was presented in a sealed cover, it was mentioned during the remand plea that cables of the bridge were not replaced during the renovation and only flooring was changed. The weight of the bridge increased due to the four-layered aluminium sheets for the flooring and the cable snapped due to that weight,” Panchal told reporters.

The court was also informed that both the repairing contractors were “not qualified” to carry out such a work.

“Despite that, these contractors were given the bridge repair work in 2007 and then in 2022. So the accused’s custody was needed to find out what was the reason for choosing them and at whose instance they were chosen,” the prosecutor said.