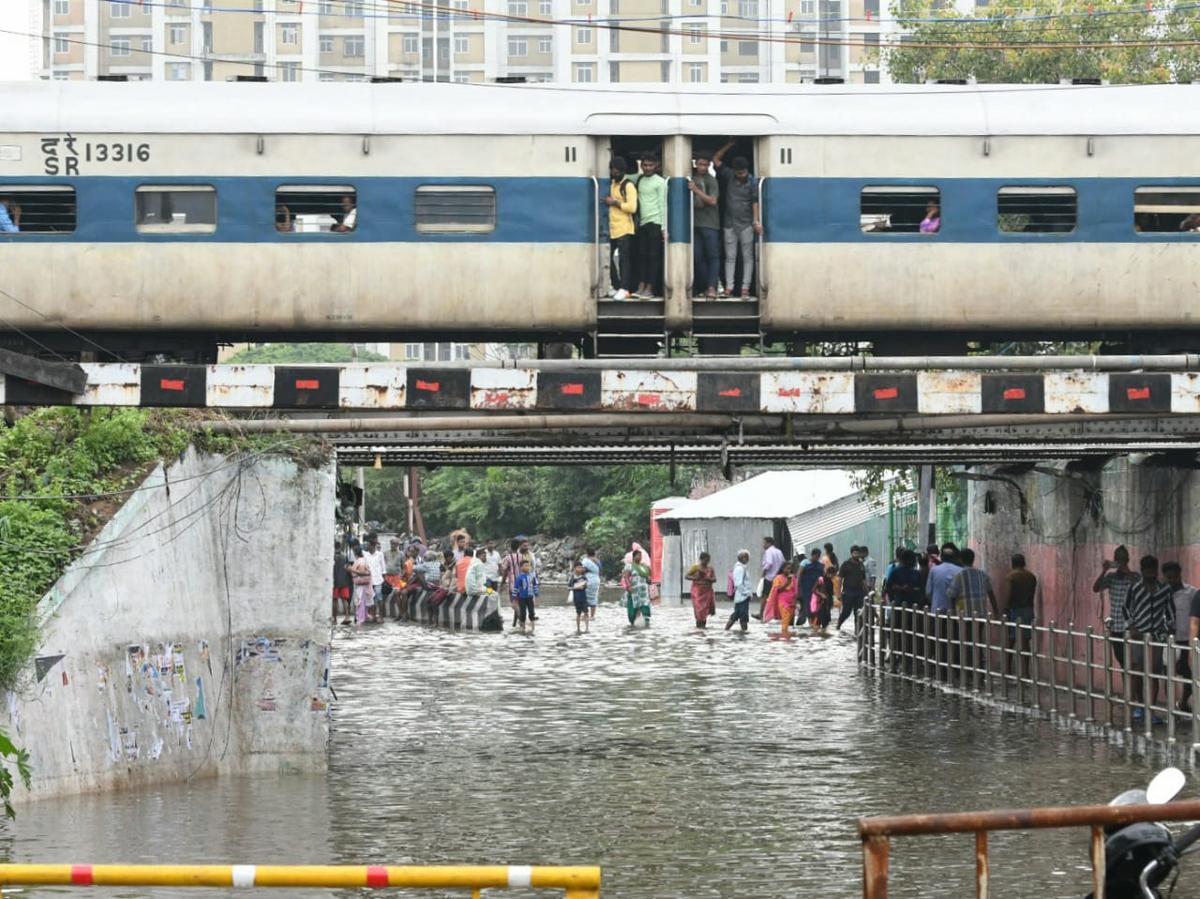 Following heavy showers in Tamil Nadu, a rain holiday was declared for schools in at least 8 districts including Chennai, Kancheepuram, Tiruvallur and Chengelpet

Following heavy showers in Tamil Nadu, a rain holiday was declared for schools in at least 8 districts including Chennai, Kancheepuram, Tiruvallur and Chengelpet

Rains that began overnight on Tuesday lashed Tamil Nadu’s Chennai and suburbs and led to inundation in a string of localities in the city and on the outskirts. The rain continued to wreak havoc and two persons were killed in rain-related incidents in the State.

A “heavy to very heavy rain” warning was issued at isolated places over Chennai, Tiruvallur, Kancheepuram, Chengalpattu, Vellore, Ranipet, Tirupattur and Tiruvannamalai districts for the next 24 hours.

There was widespread rainfall in Tamil Nadu and showers ranged between 1 cm to 9 cm, which includes Cauvery delta areas and coastal regions like Kanyakumari. The Northeast monsoon rains commenced in Tamil Nadu on 29 October. Following the heavy showers, the city witnessed heavy traffic congestion and two subways were also closed.

Meanwhile, following a spate of heavy rainfall in the state of Tamil Nadu, Chief Minister M.K. Stalin chaired a virtual meeting of top officials on monsoon preparedness and instructed officials to work in cohesion and directed them to take swift action on complaints. The Chennai Corporation has launched a   helpline number 1913 to enable city residents to report for any civic issues during the rains. Flood control room landline numbers for the Corporation in Ripon Buildings are 044 -25619206, 044-25619207 and 044-25619208.

On Wednesday, a day after heavy rains lashed Chennai, the Chennai Corporation said 156 motor pumps have been deployed around the city in 65 locations, to clear stagnant water. A total of 536 pumps have been readied for this purpose. Since October 31, trees have fallen in 19 locations, and all have been cleared by the civic body. A total of 20,000 workers are in the field to deal with rain-related complaints, civic authorities said — Malavika Ramakrishnan

In the 24-hour period ending 8.30 a.m. on Wednesday, Chennai and its surroundings witnessed some very heavy to heavy rainfall.

Chennai and its surroundings witnessed some very heavy to heavy rainfall.

Several other places in the State received less than 7cm of rainfall, the data revealed — Deepa H. Ramakrishnan

Light to moderate rain likely at many places in Tamil Nadu

The Regional Meteorological Centre (RMC), Chennai, on Tuesday forecast light to moderate rain at many places with isolated thunderstorms and lightning all over Tamil Nadu, Puducherry and Karaikal for the next four days.

The Nungambakkam station recorded 8.4 cm of rainfall on Tuesday, which is the third-highest in the last 72 years and the highest in the last 30 years. The fishermen were advised not to venture into the sea for the next two days since wind speed is expected to reach 40-50 km/hr.

Tiruvallur District Administration will release 100 cusecs of water from the Red Hills tank flood gate by 3 p.m. on Wednesday, as a precautionary measure. This is due to the inflow of runoff of around 2000 cusecs from catchment areas caused by rainfall for the past few days. The water in the tank stands at 18.42 feet as against its capacity of 21.20 feet. The storage position is 2,692 mcft as against 3,300 mcft, said an official press release from Tiruvallur District Collector Alby John Varghese. – Deepa H. Ramakrishnan There was widespread rainfall in Tamil Nadu and showers ranged between 1 cm to 9 cm.
| Photo Credit: R. Ragu

As per the forecast, moderate rain with thunderstorms & lightning is likely to occur at one or two places over Thiruvallur, Chennai, Chengalpattu, Kancheepuram, Ranipet, and Vellore, districts of Tamil Nadu during the next three hours.

Light to moderate rain with thunderstorms & lightning is likely to occur at one or two places over Thiruvannamalai, Villupuram, Tirupattur, Kallakurichi, Cuddalore, Ariyalur, Thanjavur, Thiruvarur, Nagapattinam, Mayiladuthurai, Theni, Tenkasi, Virudhunagar, Ramanathapuram, Thirunelveli and Kanyakumari districts of Tamil Nadu and Puducherry & Karaikal during the next three hours, a bulletin issued by the Regional Meteorological Centre in Chennai at 10 a.m. on Wednesday said. – Deepa H. Ramakrishnan. Read More

Day-long showers bring respite from heat in Vellore, nearby districts

Vellore recorded a total rainfall of 1.10 mm as of 8.30 a.m. on Tuesday. Due to continuous rain, the district administration warned residents against venturing into waterbodies and rivers. Local bodies, including Vellore Corporation, have been undertaking monsoon related works for the past few months.

Chennai is set to have a few more rainy days and several stretches near the arterial Anna Salai here, the congested parts of busy north Chennai, sleepy neighbourhoods tucked away in the southern and northern regions of the city and suburbs witnessed inundation. Similar was the scenario in several other parts of the State.

The Regional Meteorological Centre (RMC) in Chennai, which announced the onset of the Northeast monsoon on October 29, has forecast thunderstorms accompanied by lightning at isolated locations as well till November 4. – ANI

The municipal corporation inspected several areas in Chennai and there was no rainwater stagnation in localities like K.K. Nagar in view of preparatory measures and stormwater drain work. Authorities have installed flood monitoring cameras in localities vulnerable to flooding.

In view of the ongoing stormwater drain improvement work and Chennai Metrorail phase-2 project, barricades have been put up in many stretches of roads.- PTI Holiday for schools and colleges in Tamil Nadu

In view of the day-long showers that lashed Tamil Nadu, a holiday was declared for schools and colleges where schools were closed in Tamil Nadu’s Villupuram, Vellore, and Tiruvannamalai districts. A holiday was also declared for schools and colleges in the Ranipet district due to rain. The holiday was also declared for primary and middle schools only in the Tirupattur district. For the first time in three decades, Nungambakkam, a core city area recorded 8 cm of rainfall in a single day and suburban Red Hills 13 cm followed by 12 cm in Perambur.