Republic TV editor Arnab Goswami was detained by Raigad police on Wednesday in connection with abetment to suicide case filed against him and two others in 2018. “Arnab Goswami is currently being taken to Raigad. He shall be interrogated by the investigating officer and the further course of action will be decided accordingly,” Sanjay Mohite, IG Konkan Range said. The police in Raigad have not yet confirmed the arrest.

Goswami said he was physically assaulted by the cops. Visual flashed on Republic TV showed Goswami being forced into a police van.

In 2018, an architect and his mother died by suicide over alleged non-payment of dues by Goswami’s Republic TV, the official said.

Union Minister for Information and Broadcast Prakash Javadekar said the incident is a reminder of the “emergency days.” “We condemn the attack on press freedom in #Maharashtra. This is not the way to treat the Press. This reminds us of the emergency days when the press was treated like this,” he tweeted. “Those in the free press who don’t stand up today in support of Arnab, you are now tactically in support of fascism,” Union Minister Smriti Irani tweeted. External Affairs Minister also said the incident has “shades of democracy.” Former Maharashtra Chief Minister tweeted, “Although emergency was defeated in 1977, the mentality is still alive Today, the supporters of emergency-Congress and Shivsena are displaying the same undemocratic brutality to crush any voice of dissent.”

In a statement, the Editors Guild of India said it is “shocked to learn about the arrest of Arnab Goswami” in the early hours of Wednesday.”We condemn the sudden arrest and find it extremely distressing. The Guild calls upon the Chief Minister of Maharashtra to ensure that Goswami is treated fairly and state power is not used against critical reporting by the media.”

In May this year, Maharashtra Home Minister Anil Deshmukh said the state CID will re re-investigate the case. The case was closed by the Raigad Police last year. Interior designer Anvay Naik and his mother Kumud Naik were found dead at their bungalow in Alibaug in May 2018. Naik’s daughter Adnya claimed non-payment of dues by Republic TV had driven her father and grandmother to suicide.

The police had found a suicide not written in English that said he and his mother decided to take the extreme step on account of payments due to them not being cleared by the owners of three companies – television journalist Arnab Goswami of Republic TV, Feroz Shaikh of IcastX/Skimedia and Niteish Sarda of Smartworks. The three firms owed Naik’s company, Concorde Designs Pvt Ltd, Rs 83 lakh, Rs 4 crore and Rs 55 lakh respectively, the note added. 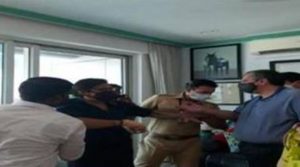