Tony Labranche, who recently graduated from high school, was among the three Democrats who won state representative seats for Amherst’s Hillsborough County District 22 this week.

An 18-year-old Democrat from New Hampshire has become one of the youngest elected officials in the United States’ history after he won a seat in the state legislature on Wednesday. The teenager will soon be sworn in as a state representative for the town of Amherst.

Tony Labranche, who recently graduated from high school, was among the three Democrats who won state representative seats for Amherst’s Hillsborough County District 22 this week. “Proud to represent the LGBTQ community at the state house and proud to be the first openly gay man to be elected in Amherst,” he tweeted soon after he won the election. 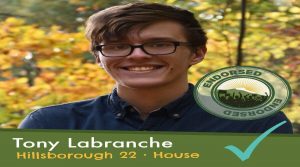 “We did it! Our movement of compassion and love has won! Thank you Amherst for giving me the amazing privilege and honour to represent you in the state house!” another tweet read.

His campaign staff — a few of his friends and peers from high school — helped spread his message across Amherst. With 3,641 votes, Labranche was able to defeat his Republican contenders Peter Hansen, Danielle Pray and Pamela Coughlin.

In an interview with NBC-affiliated local television station WXII-TV, Labranche revealed that he first became civic minded while battling cancer as a 10-year-old child. “It started at age 10,” he said. “I was diagnosed with stage 3 colon cancer, I was also the youngest colon cancer survivor ever at the time and seeing the cost of health care in the United States hurt me.”

According to local media reports, Labranche currently serves as the treasurer of the Amherst Town Democratic Committee and was previously defeated in the election for the Souhegan Cooperative School Board.

“I went from beating cancer to running for state rep and here I am,” he told WXII-TV. “I look forward to working across the aisle to get stuff done.”