The new stimulus package reinforces the ‘fiscal conservatism’ ideology of the government — rather than large cash transfers, the growth philosophy centres around creating an ecosystem that aids domestic demand, incentivises companies to generate jobs and boost production. 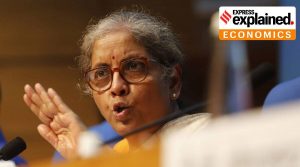 Atmanirbhar Bharat 3.0 may well be Finance Minister Nirmala Sitharaman’s last Covid-19 relief package ahead of Budget 2021-22, but there is a discernible pattern to the four major announcements made over the last seven months. It reinforces the ‘fiscal conservatism’ ideology of the government under Prime Minister Narendra Modi — rather than large cash transfers, the growth philosophy centres around creating an ecosystem that aids domestic demand, incentivises companies to generate jobs and boost production, and simultaneously extends benefits to those in severe distress, be it firms or individuals.

The headline numbers — stimulus of Rs 29,87,641 crore or 15 per cent of GDP till date — are more for optics. For instance, Sitharaman Thursday said the government’s contribution to the stimulus imparted so far was 9 per cent of GDP, the balance 6 per cent being attributed to the Reserve Bank of India (RBI). She put the size of Thursday’s Atmanirbhar Bharat 3.0 at Rs 2,65,080 crore. Even if one takes an optimistic account of the extra spend this year, it will add up to just Rs 1,18,200 crore, not even half of what she said. The Rs 1,45,980 crore expenditure in the form of production-linked incentives (PLIs) to 10 new sectors will be over five years, and likely kick in only next financial year.

But even the Rs 1,18,200 crore extra spending this year, by no means, is insignificant: it accounts for 0.6 per cent of GDP. The first package on March 27, the highlight of which was the Pradhan Mantri Garib Kalyan Yojana, totalled Rs 1.08 lakh crore; the second set of announcements made over five days in May added up another Rs 1.08 lakh crore to the Centre’s fiscal cost; the third package in October had a capital expenditure component of just Rs 37,000 crore. Put together, all Covid-19 relief measures would increase the Centre’s actual fiscal outgo by under 2 per cent of GDP in 2020-21.

Given the recovery charted by the economy over the last two months and the trajectory of the pandemic, in terms of addition to active Covid-19 cases, and the low fatality numbers, not many economists are advocating large cash transfers to the poor today. If at all, the right time for big transfers was April, May, June. “Given the uncertainties of the Covid-19 pandemic then, the government then decided to assess the distress, and also save the firepower for later months… Now, after unlocking, economic recovery has been better than expected. How much sense does it make to dole out cash now,” an economist, who works closely with the government, said.

So, what the government has done over the last seven months through its many relief packages and reform measures is create avenues or open up opportunities for primary and secondary sectors — dismantling of mandis in agriculture and labour law simplification for manufacturing — to improve incomes.

Simultaneously, by offering to foot the bill for provident fund contributions, it has nudged companies, big and small, to hire. The PLI scheme, now extended to 10 sunrise sectors including auto and tech, is also as much about self-reliance or cutting down imports, as it is about offering cash incentives to boost domestic production, which is expected to create employment.

In the initial months, the government did put money in the hands of the most vulnerable people through direct benefit transfers, and also offered higher quantity of food grains for basic sustenance. And now, for the front line sectors most hit by the pandemic, it has extended the credit guarantee scheme, which offers one year moratorium, and extends the period of repayment to four years compared with three years as fixed for MSMEs, the original beneficiaries of the scheme. It is not there are no flip sides to this strategy. As the RBI noted in its ‘State of the Economy’ report on Wednesday, while it is possible that the third quarter (October-December) may not see a contraction in GDP growth, there are significant risks — relentless pressure of inflation, poor global growth following a second wave of Covid-19, and intensifying stress among households and firms both.

Former Chief Statistician of India, Pronab Sen, pointed out that financial savings of households increased to almost 21 per cent of GDP in April-June this year (compared with 10 per cent of GDP in corresponding period last year) because individuals couldn’t spend because of a complete lockdown.

“Over the next two quarters, families dipped into their savings, and the financial savings has likely dropped. This has also coincided with the festive season. High frequency economic indicators appear bright because they reflect this pent-up demand and festive purchases,” Sen told The Indian Express. The worry, according to him, is income levels haven’t risen and the third quarter may not be as rosy. “The last quarter and further more the first quarter of 2021-22 will certainly show positive growth because of the huge base effect,” he said.

But not all are so worried. A policy analyst, who also works closely with the government said the top 10 per cent rich in the country consume more than the people in the bottom 50 per cent of income levels. “And for the bottom 50 per cent, spending cannot reduce beyond a point. Discretionary spending for them will be low, but their expenditure on essentials is unlikely to fall from what it is now. The rich have, however, started spending. Salaries have been restored across sectors,” the analyst said.