On the South China Sea issue, Jaishankar expressed “concern about actions and incidents that erode trust in the region” – in a clear reference to Beijing’s aggressive actions. 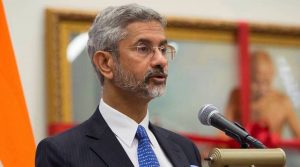 In a clear signal to China, External Affairs Minister S Jaishankar on Saturday emphasised the importance of adhering to international law, “respecting territorial integrity and sovereignty”, and promoting a rules-based global order. Last month, he had spoken about respecting territorial integrity and sovereignty after the Indo-US 2+2 meeting in New Delhi.

On the South China Sea issue, Jaishankar expressed “concern about actions and incidents that erode trust in the region” – in a clear reference to Beijing’s aggressive actions. He stated that the Code of Conduct negotiations should not be prejudicial to legitimate interests of third parties and should be fully consistent with UNCLOS. He also underlined the need for greater international cooperation in the post-Covid world to tackle the challenges cutting across national boundaries such as terrorism, climate change and pandemic among other issues.

Jaishankar underlined the key role played by the East Asia Summit (EAS) as a leading mechanism of the Indo-Pacific region and reiterated India’s support to make it stronger and more responsive. He also re-affirmed the importance of EAS as the Leaders-led forum to exchange views on strategic issues.

On Covid-19, he briefed the EAS leaders about India’s response to the pandemic and highlighted India’s efforts to support the international community. He reiterated Prime Minister Modi’s commitment to help make the Covid vaccine accessible and affordable to all nations. The Ministry of External Affairs said that he “noted the growing interest in the Indo-Pacific as an integrated and organic maritime space, with ASEAN at its centre. He appreciated the synergy between the ASEAN Outlook and India’s Indo-Pacific Oceans Initiative. India was equally positive about the Indo-Pacific policies announced recently by other nations. Harmonizing various perspectives would never be a challenge if there is commitment to international cooperation”.

The summit discussed ways to strengthen the EAS platform and to make it more responsive to emerging challenges on its 15th anniversary and adopted the Ha Noi Declaration. The leaders underlined the importance of cooperation in ensuring safe, effective and affordable access to Covid-19 vaccines. They called for greater cooperation in keeping the global supply chains open for an expeditious and sustainable economic recovery.

Regional and international issues such as the South China Sea, situation in Korean peninsula and Rakhine state were also discussed. Besides the Hanoi Declaration, the summit also adopted four other leaders’ statements on Marine Sustainability; Epidemics Prevention and Response; Women, Peace and Security; and Steady Growth of Regional Economy.

The virtual summit meeting was chaired by the Prime Minister of Vietnam, Nguyen Xuan Phuc, and witnessed the participation of all the 18 EAS countries. US President Donald Trump had named National Security Advisor Robert C O’Brien as his Special Envoy to the summit, where he reaffirmed the commitment of the United States to prosperity and security in the Indo-Pacific during virtual remarks.

Established in 2005, the EAS is a premier leaders-led forum for discussions on important strategic issues in the Indo-Pacific, and a leading confidence-building mechanism in the region. India strongly believes that the ASEAN-led frameworks, of which the EAS is an important part, are at the core of the regional security architecture and need to be strengthened further.

The EAS is a regional grouping of 18 participating countries –10 ASEAN countries (Brunei, Cambodia, Indonesia, Lao PDR, Malaysia, Myanmar, Philippines, Singapore, Thailand and Vietnam), Australia, China, India, Japan, Republic of Korea, New Zealand, Russia and the US. India is a founding member of the EAS. The 18 members of the EAS together represent 54% of the world population and account for 58% of the global GDP.

This year marked the 15th anniversary of the EAS, which is the only leaders-led forum of its kind that brings the US, China, Russia, India, RoK and Australia together on one platform.

The network of ASEAN-led frameworks, like the EAS, are a vital part of the regional security architecture. India attaches great importance to EAS as a premier leaders-led forum and sees it as a logical platform to promote a free, open, inclusive, transparent, rules-based, peaceful and prosperous Indo-Pacific region, officials said.