The court has extended the judicial custody of Umar Khalid and JNU student Sharjeel Imam by three more days. 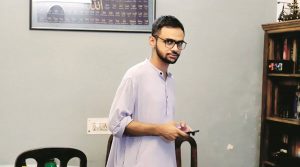 Former JNU student Umar Khalid, arrested in connection with a case related to the Northeast Delhi riots, Friday told a Delhi court that he was not facing any issues in the jail apart from “curbing of liberties and a malicious investigation”.

Khalid made these submissions after Additional Sessions Judge Amitabh Rawat asked whether the issues earlier stated to have been faced by Khalid in Tihar jail have now been resolved.

“Except for the curbing of liberties and malicious investigation in the case, I have no other problems,” Khalid said.

Khalid and JNU student Sharjeel Imam were produced before the court through video conferencing, where the police moved an application to extend their judicial custody by three days.

The court has sent them to judicial custody till November 23 and they will be produced on Monday along with the 15 accused persons in the UAPA case investigated by the Special Cell of Delhi Police.

Trideep Pais, who appeared on behalf of Khalid, told the court that he went through the application for the extension of judicial custody. “How much trouble they have taken to see that this application is different from the previous one…it is nearly packaged without any typographical errors,” Pais told the court.

On November 3, several accused in a North-East Delhi riots case complained that they were being denied warm clothes, access to medicines amid a Covid outbreak in the jail, and letters from their families. Following this, ASJ Rawat had warned Tihar officials that he would conduct a physical inspection of the jail premises.

On October 22, Khalid told the court that he had been kept under solitary confinement by Tihar Jail authorities for several days and asked the court why he was being punished. After this was brought to the court’s attention, Khalid had informed the court that “things are much better”, following which the court directed the Tihar jail superintendant to ensure that this continues.

According to the police, an FIR was registered against Khalid on March 6 based on the information provided by an informer to sub-inspector Arvind Kumar of the narcotics unit of the Crime Branch. As per the FIR, Kumar said the informer told him that the Northeast Delhi riots in February was part of a “premeditated conspiracy” allegedly hatched by Khalid, one Danish, and two others associated with different organisations.